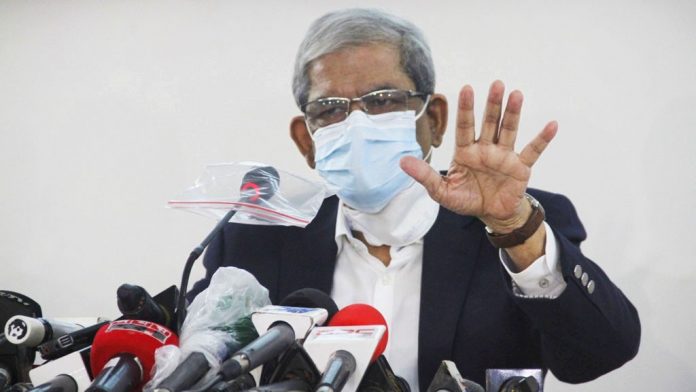 Sheikh Hasina and her government have failed to play any effective role in resolving the Rohingya crisis,’ says the BNP secretary general

Stating that the prime minister’s visit to the USA has “no success”, BNP Secretary General Mirza Fakhrul on Sunday alleged that the government wants to take international advantage by keeping the Rohingya problem alive.

“I didn’t find any outcome from her [Sheikh Hasina’s] visit. Even, she couldn’t come up with a solution to the Rohingya problem,” said BNP Secretary General Mirza Fakhrul Islam Alamgir.

Fakhrul made the remarks while talking to reporters after placing wreaths at BNP founder Ziaur Rahman’s grave together with the members of the newly formed committee members of Jatiyatabadi Krishak Dal.

He also said their party thinks Prime Minister Sheikh Hasina and her government have failed to play any effective role in resolving the crisis.

“In fact, they [government] want to take international advantage, especially from the western countries, by keeping this issue alive,” the BNP leader said.

He urged the government to take steps for holding the next election under a neutral election-time administration to establish a truly representative government and parliament. The prime minister could not yet reach out to the main stakeholders by visiting the countries like China and India with an aim to have a salutation to the Rohingya problem, he added.
The BNP leader said there is no democracy in the country while a fascist governing system has been established here by snatching people’s rights, destroying the Election Commission and politicizing the state institutions.

“But the prime minister didn’t mention in her speech how she’ll overcome this situation, restore democratic governing system, democratize the electoral system and remove people’s sufferings,” he observed.

Fakhrul hoped that good sense will prevail upon the government to give democracy an institutional shape and restore people’s right to vote and their freedom of expression.
Fakhrul alleged that the prime minister made “indecent remarks” about BNP Chairperson Khaleda Zia while refuting various reports published in the media about her visit. “We strongly condemn and protest it.”

He also alleged that Sheikh Hasina in her address to the UNGA resorted to lies about the country’s situation. “This is her only achievement [from her visit].”