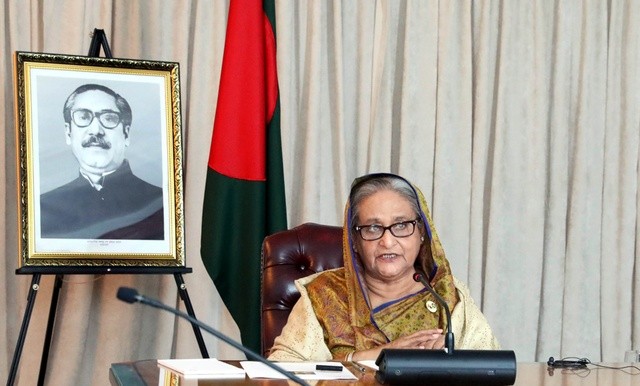 The NDB earlier initiated its membership expansion and welcomed the admission of Bangladesh, the UAE, and Uruguay as new members

Prime Minister Sheikh Hasina has termed Bangladesh’s membership in the New Development Bank as a time-befitting achievement that will open a new avenue of foreign financing for the country.

She said it will play a supportive role in achieving the country’s development goals.

The joining was confirmed after the country submitted its “Instrument of Accession” to the Brazilian government on September 16, said the Bangladesh Permanent Mission at UN Saturday.
The NDB – established by BRICS in 2015 – earlier initiated its membership expansion and welcomed the admission of Bangladesh, the UAE, and Uruguay as new members.

Membership of Bangladesh in the NDB has paved the way for a new partnership at a momentous time of the 50th anniversary of independence, said Finance Minister AHM Mustafa Kamal.
He said the membership in the NDB is an important step forward in meeting the development vision of Prime Minister Sheikh Hasina.

NDB’s board of governors authorized the bank to conduct formal negotiations with prospective members in late 2020.

After a round of successful negotiations, the NDB approved the admission of the UAE, Uruguay and Bangladesh as its first new members.

The NDB was set up by Brazil, Russia, India, China and South Africa to mobilize resources for infrastructure and sustainable development projects in BRICS and other emerging economies and developing countries, complementing the existing efforts of multilateral and regional financial institutions for global growth and development.
The multilateral development bank has an authorized capital of $100 billion, which is open for subscription by members of the United Nations.