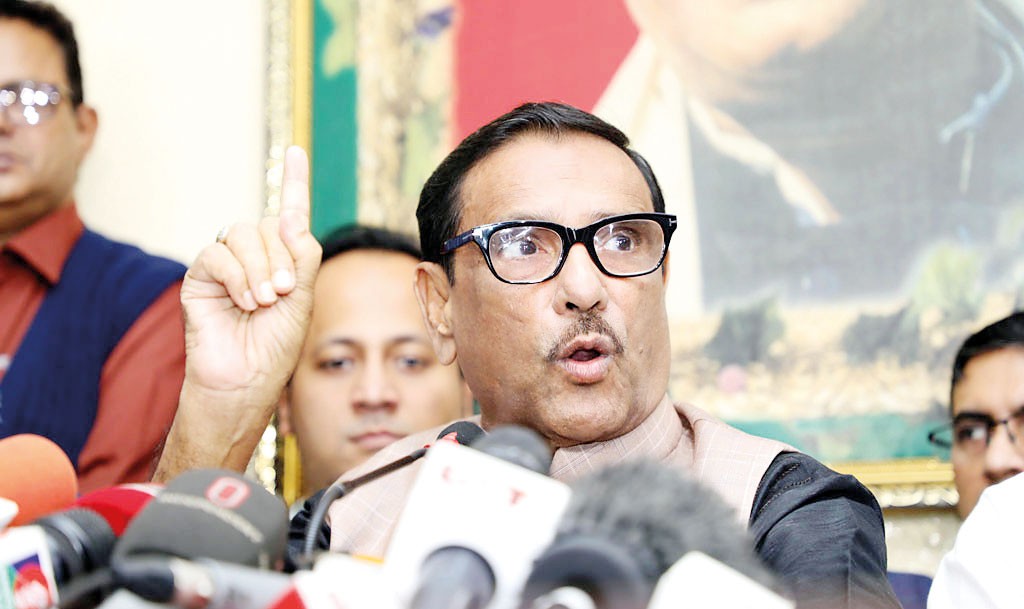 BNP has lost its stride with politics, says the ruling party general secretary

Awami League General Secretary Obaidul Quader on Saturday said BNP’s weapon of movement has become rusty and their so-called surge in the movement has actually declined.

Addressing a press conference at his official residence in Dhaka, he said BNP has lost its stride with politics and the tide of support it once had has ebbed.

He made the remarks in response to BNP Secretary General Mirza Fakhrul Islam’s earlier comment that their tide of public support has shaken the government to the core.

Quader, also the road transport and bridges minister, said: “By making such comments, Mirza Fakhrul may feel self-satisfied. They can also try to avoid the wrath of their own work, but the people know very well that their statements contradict with thereality.”

He added that BNP feels anxious in anticipation of a massive loss in the next general election — which is likely to take place by December 2023.

There is no benefit in threatening the government of Prime Minister Sheikh Hasina and the Awami League, Quader said.

“Awami League is never afraid of anything. Bangabandhu’s political ideology called for marching forward, overcoming obstacles and challenges along the way, and Awami League is still following his footsteps under the leadership of his daughter Sheikh Hasina,” he added.

The senior ruling party leader said the nation knows the Awami League’s bravery, struggle and movements and its glorified
history.

On the other hand, the people also know about BNP’s reckless politics, killing of democracy, looting and opportunist politics, he said.

He said BNP’s so-called surge of public support was not seen in any elections in the last 13 years.

They are now unwilling to take part in polls and that is why they kept their politics limited to mass media and social media avoiding the political field as well as streets, he said.

“Your evil attempts to fish in troubled water do not remain unknown to us,” the minister said addressing BNP.

“The caretaker government system was scrapped following a High Court’s verdict. It was an interim system. It cannot run for a long period,” he mentioned.

Election Commission is a constitutional body and the government has no interference in any activities of this institution, he added.

He said those who introduced “multi-party mockery” in the name of multi-party democracy and those who don’t practice democracy inside their own party are now talking about democracy.

Pointing to Mirza Fakhrul, Quader questioned why Fakhrul did not join parliament even after being elected in pollsand what type of democracy that is.

The minister said parliamentary polls will be held in due time as per the constitution like in other democratic countries. So, there is no need to make evil attempts to make chaos unnecessarily centring any settled issue, he said.