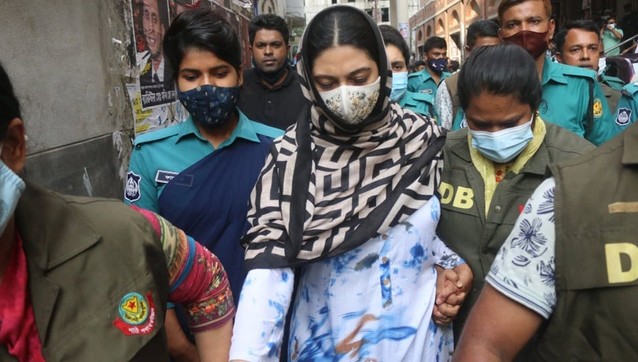 A Dhaka court has granted the police two days to quiz model Faria Mahbub Piasha in custody in a case over the alleged rape and murder of college student Mosarat Jahan Muniya.

Dhaka Metropolitan Magistrate Nivana Khayer Jessi issued the order on Sunday in response to the Police Bureau of Investigation’s petition for a seven-day remand, according to Swapon Kumar Mondal, a court officer.

The remand petition against Piasha, who is currently in jail in a narcotics case, was filed on Sep 13 in connection with the case filed by Muniya’s sister Nusrat Jahan Tania. The court then set Oct 3 for the hearing in the presence of the accused.

Tania filed the case against eight people, including Bashundhara Group Managing Director Sayem Sobhan Anvir, his wife and parents, with the Dhaka Women and Children Repression Prevention Tribunal No. 8.

She accused them of rape and murder. After an initial hearing, Judge Mafruza Parveen ordered the Police Bureau of Investigation to investigate the case and submit a report.

The High Court, however, granted a six-week anticipatory bail for Anvir’s wife Sabrina.

Muniya, who was an HSC candidate at a college in Dhaka, was found dead in a flat in Dhaka’s Gulshan on Apr 26. After losing her parents, she was living in the capital alone, while other members of her family were in Cumilla.

“YOU WON’T GET THE TIME”

The case alleges that Anvir persuaded Muniya to leave her college hostel for a rented apartment by giving words of marriage in June, 2019 and then proceeded to rape her for 7-8 months there.

The matter came to the attention of Anvir’s parents who threatened to kill her if she did not leave Dhaka. Later, Anvir sent her off to her sister’s home in Cumilla in February 2020 and kept in touch over the phone.

A month later, Anvir brought her back from Cumilla to a flat in Gulshan, repeatedly vowing to marry her. With Muniya staying at the flat alone, Anvir again raped her but this time, he had impregnated her.

The victim then pressed Anvir for marriage, leading to fights and conflict between the two. But when the others accused in the case came to know of this, they ‘conspired’ to kill the victim.

At one stage, Anvir asked the girl to travel to Cumilla once again, saying that his mother would otherwise have her killed. She then retaliated by threatening to reveal everything by going live on social media.

Anvir then told her, “You won’t get the time. I will take care of it.”

Tania in her complaint said that her sister caught wind of the danger and wanted to flee to Jashore and on the morning of Apr 26, requested the landlord and his wife for their car to make the trip.

However, they declined to assist her and told the threat-makers about the matter. It was then that the accused executed their plan to murder the victim, Tania’s plea mentioned.

On Aug 1, the police arrested model Piasha in a raid during which, they found yaba, liquor and shisha at her flat in Baridhara. Following several spells of questioning in police custody in three separate cases filed by Gulshan, Bhatara and Khilkhet police, she was sent to jail.

She later received bail in the cases filed by Bhatara and Khilkhet police on Sept 30, but remained behind bars in the case filed by Gulshan police.