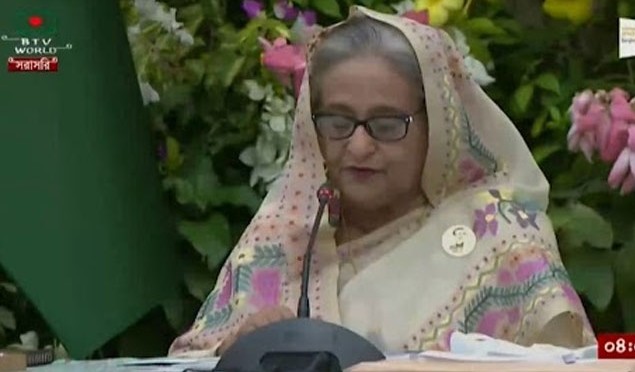 Prime Minister Sheikh Hasina says that some people have made a business out of refugees, referring to a potential reason for the stalemate in the repatriation of the Rohingya to Myanmar.
“For some of them, refugees are just a business,” Hasina said at a media briefing on Monday.

“If there weren’t any refugees, they wouldn’t have jobs. Nobody wants to say it out loud, but I will.”

The prime minister said she was disappointed with the international response to Bangladesh’s repeated pleas for help in returning the Myanmar nationals to their own country.

Crimes, human smuggling and drug trafficking are on the rise in Rohingya camps in Cox’s Bazar, Hasina added.
It’s difficult to stop the crimes.”

“I warned the international community about this, but I am sorry to say they have not taken concrete steps to advance repatriation efforts.”

The prolonged presence of so many refugees in makeshift camps in Cox’s Bazar is also harming the local environment and forests, she said.

On Sept 22, Hasina joined an event on the Rohingya crisis on the sidelines of the UN General Assembly in New York.

During the event she called on the international community to act with timeliness and urgency to return Rohingya people in Bangladesh to Myanmar, warning that further delays pose risks to regional security.
Resolving this humanitarian crisis is a collective responsibility as its implication goes beyond borders,” Hasina had said.

“Delaying this crucial problem jeopardises our collective security. The growing frustration over the lack of progress in repatriation entices many to get involved in criminal activities, and they are easy prey to extremist ideologies. This could potentially destabilise the entire region.”

The prime minister had emphasised that whatever Bangladesh had done for the refugees was done purely on a temporary basis.

The true solution for the Rohingya crisis was to ensure sustainable repatriation and had urged all efforts to be invested towards that end.

“We must remember humanitarian assistance is essential, but is, in no way, a permanent solution,” she had said.