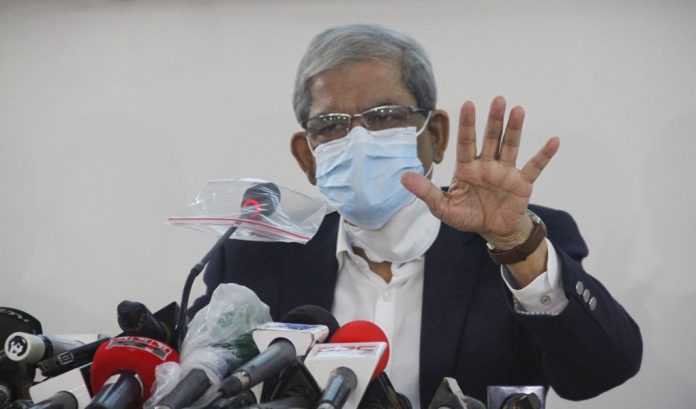 He renewed call for a non-party election-time caretaker government

BNP Secretary General Mirza Fakhrul Islam Alamgir has urged students and common people to get united as another “mass uprising” like the one happened in the ‘90s is imminent to ensure the fall of the Awami League government.

“The students and people together ousted the dictator in the 90 through a mass upsurge, led by our leader Begum Khaleda Zia. That time has come again. We’ve to carry out another mass uprising with such determination and spirit,” he said on Sunday.

Speaking at a discussion, the BNP leader said it is now high time for cementing a national unity to wage a united movement.

“Let’s not waste time and delay anymore to get united. Now we need the unity of
students and people and the unity of all parties.”

Pro-BNP student leaders of All-Party Students Unity (Apsu) of the ‘90s arranged the program at the Jatiya Press Club, marking the Shaheed Jihad Day commemorating the 31st anniversary of the martyrdom of Nazir Uddin Ahmed Jihad.
Jihad, a JCD activist of Ullapara upazila in Sirajganj, was shot dead in Dhaka on October 10, 1990, during the anti-Ershad movement.

Recalling the role of students in various movements in the past, Fakhrul said the youth and the student community have brought changes in every society from age to age.

“Today, you must stand up and turn around for a change [in government]. You’ve to wake up to defeat this horrible government of [Sheikh] Hasina,” he said.
Fakhrul said a non-party election-time caretaker government is a must to hold the 12th parliamentary election in a fair and credible manner and “restore” people’s right to vote.

“People will be able to elect a government and parliament of their choice through freely exercising their voting rights if the election is held under a neutral caretaker government.”
Depicting the current situation in the country, he said the nation is going through a terrible time as all the state institutions have been destroyed.

“The government has destroyed our judiciary, parliament and administration. It has also destroyed our education system, health system and economy. So, Hasina’s government can’t be given any more time [to stay in power].”

The BNP leader alleged that people now cannot express their opinion while journalists are unable to write freely.

“Those who used to talk on television also do not now dare to say anything. Kanak Sarwar used to unveil some truth from abroad… but the government arrested his sister and placed her on remand.”

Under the current situation of the country, Fakhrul urged the people of all walks of life to take a vow to establish a pro-people government through a credible nationalelection under a neutral government by ousting the Awami League from power.