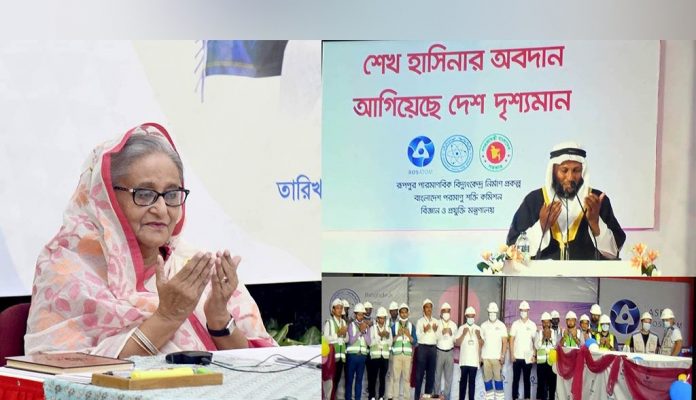 Prime Minister Sheikh Hasina on Sunday said the government is looking for a suitable place in the southern region to build another nuclear power plant to meet the country’s growing demand for power.

“We’re looking for a place in the Southern region… It’s difficult to find hard soil there but we’re surveying various islands and different places to find a suitable one,” she said.
Sheikh Hasina said this while addressing the installation program of the reactor pressure vessel (RPV) of Power unit-1 of the Rooppur Nuclear Power Plant (RNPP) project. She joined the program from her official residence Ganabhaban through a videoconference.

She said the government has taken a decision to set up another nuclear power plant on completion of the RNPP project. “We’ll do that if we get a suitable place. My choice is to do that on the other side of the Padma River… which means the southern region of the country.”

Mentioning that the government is conducting surveys to select a suitable place, she said it would not be a tough job to select a site. “If the government can build another nuclear power plant in the country, there’ll be no problem in power supply.”
The prime minister said the government has set a target to make the country a developed one within 2041. “Already, we’ve got the status of a developing country…this is not enough.”

In 2071, she said, the country will celebrate its 100 years of independence. “That will surely be celebrated by the new generation in a beautiful, developed, prosperous and modern technology knowledge-based country,” she added.

Russian and Bangladeshi expert teams installed the reactor pressure vessel brought to the project site from Russia in October 2020.

The nuclear power plant, designed and built by the engineering division of Rosatom State Atomic Energy Corporation of Russia, will consist of two such VVER-1200 reactor power units.

Their life cycle is expected to be 60 years, with the possible extension of service life of another 20 years.
The Russian design with VVER-1200 reactors, successfully implemented at Novovoronezh NPP-2, was selected for the first NPP in Bangladesh.

The plant will have two power units with an electrical capacity of 1,200 MW each.

A video presentation on RNPP was screened at the program. The prime minister also witnessed the final installation process of RPV.

Hasina said her government wants to ensure electricity for all and the nuclear power plant will play a significant role in this regard.
She described the installation of the reactor pressure vessel in the Rooppur nuke plant as a matter of pride for the country and its people.

“New distribution lines are also being installed from the nuclear power plant,” she said, hoping that electricity from there will reach houses in 2023-24.

Regarding security and safety in the plant areas, the prime minister said a four-tier security measure has been taken using the modern technologies in the nuke plant. “So, there’s no chance of any unwanted accident to happen in the country’s maiden nuclear power plant.”

Hasina said setting up a nuclear power plant in Rooppur is a new experience for the country’s scientists, engineers and those who are working in the atomic energy sector.

“Necessary training has also been arranged to develop skilled manpower to run such a sophisticated and highly technical establishment,” she added.
The prime minister also extended her thanks to Russian President Vladimir Putin for his country’s support to Bangladesh in setting up the nuclear power plant in Rooppur.