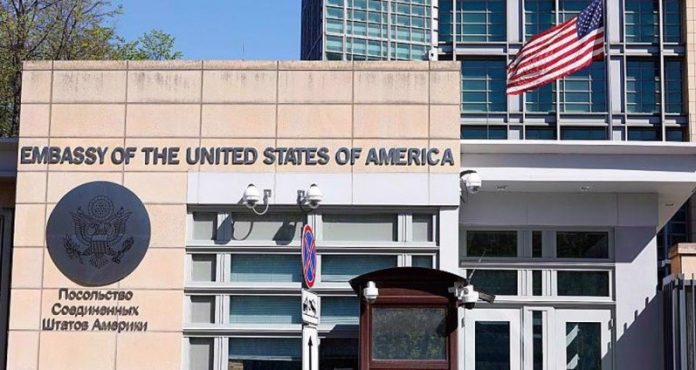 The Russian foreign ministry has called on the US embassy in Moscow to lift the diplomatic immunity of three of its staff suspected of stealing personal belongings from a Russian citizen.

The three employees would have to leave Russia immediately if the United States refuses to lift their diplomatic immunity, the Interfax news agency cited the ministry as saying on Friday.

According to Interfax, three US citizens from the Moscow embassy under the influence of alcohol stole a backpack from a Russian man in a bar in central Moscow.

The Moscow police identified the three men as servicemen of the US Marine Corps aged 21 to 26, the news agency reported, citing police spokesman Vladimir Vasenin.

The Russian state-owned news agency Tass said the alleged theft occurred on Sept. 18 and reported that the Interior Ministry estimated the value of the stolen items at just over $200.

A criminal case has been launched over the incident and the possible charges carry a maximum penalty of five years in jail.

Moscow’s move comes days after NATO expelled eight members of Russia’s delegation to the military alliance over allegations that those supposed diplomats were acting as spies for the Kremlin.

The relationship between NATO and Russia is at its lowest point since the end of the Cold War and Moscow slams the decision for undermining the normalization of ties between the US-led military alliance and the Kremlin.

The alliance also reduced the number of Russian representatives that can receive accreditation from NATO from 20 to 10, the NATO official said.

Tensions are at an all-time high between Moscow and Washington over a range of issues, including claims of meddling in US elections and Russia’s human rights record.

Earlier this week a group of US Democratic and Republican senators have called on President Joe Biden to expel up to 300 Russian diplomats from the United States if Moscow did not issue more visas for Americans to represent Washington in Russia.

Russia’s foreign ministry in response has said Moscow did not have that number of diplomats in Washington and that the proposal appeared to include diplomatic staff at Russia’s mission at the United Nations.

Russian officials said if that proposal were implemented, Russia would force the closure of the US Embassy in Moscow.