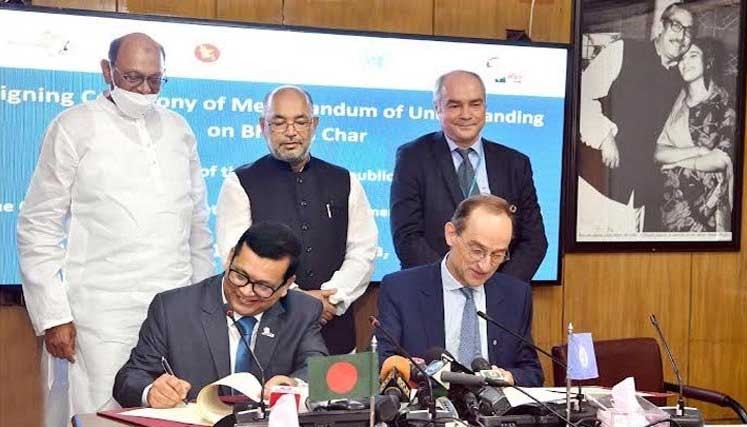 The UN was vocal against relocating Rohingyas, but now joined forces with the govt

Bangladesh and the United Nations (UN) signed a formal document Saturday, ending a long wait for a much-sought UN engagement at Bhasan Char on the humanitarian front to support the Rohingyas there.

Secretary of the Ministry of Disaster Management and Relief Md Mohsin and Bangladesh Representative of UNHCR, the UN refugee agency, Johannes van der Klaauw signed the memorandum of understanding (MoU) at the secretariat.

He also said they have finally taken the right decision and it will be easier for humanitarian agencies to provide services following Saturday’s MoU signing.

The signing of the MoU demonstrates the UN’s support to the government’s massive investment there to ensure better living for the Rohingyas, officials said.

The MoU – signed by UNHCR on behalf of UN agencies working on the Rohingya response in Bangladesh – establishes a common protection and policy framework for the Rohingya humanitarian response on the island.
The MoU is a further expression of the government and people of Bangladesh’s generosity and support towards the Rohingya population until they can return safely and sustainably to Myanmar.

It is also a reconfirmation of the UN’s commitment to continue supporting Bangladesh in leading the humanitarian program for almost 1.1 million Rohingya refugees in the country, said the UNHCR.

The agreement relating to Bhasan Char allows for close cooperation between the government and the UN on services and activities to the benefit of the increasing numbers of Rohingya refugees living on the island, according to the UN refugee agency.
Key Areas

These cover the key areas of protection, education, skills-training, livelihoods and health, which will help support the refugees to lead decent lives on the island and better prepare them for sustainable return to Myanmar in the future.

The UN response will build upon and complement the humanitarian assistance, so far provided by Bangladeshi NGOs on the island.

Before signing the MoU, the UN held discussions with the Rohingya community in Cox’s Bazar, as well as those already on the island, including during the UN visit to Bhasan Char in March 2021, to better understand their needs and views.
These discussions, as well as those with the government counterparts and Bangladeshi NGOs working on the island, are expected to continue on a regular basis and further inform any humanitarian and protection responses on Bhasan Char.

The UN encouraged the international community to increase its generous support to the humanitarian response in Bangladesh, recognizing that the Joint Response Plan for the Rohingya Humanitarian Response in Cox’s Bazar is currently less than half-funded for this year.

This support should continue until refugees are able to return to Myanmar in a safe, voluntary, dignified and sustainable manner, which remains a shared priority of the UN and government of Bangladesh, as well as the desire of the Rohingya refugees in the country, said the UN.

The numerous challenges associated with the temporary hosting of persecuted Rohingyas from Myanmar have compelled the Bangladesh government to plan the
relocation of 100,000 Rohingyas to Bhasan Char, according to the Ministry of Foreign Affairs.

Around 1,642 Rohingyas were relocated to Bhasan Char on December 4 last year while the second batch, comprising 1,804 Rohingyas, were transferred from Cox’s Bazar to the island on December 29 last year.

Bhasan Char, a temporary shelter for Rohingyas until repatriation, remained unhurt with no casualty to personnel and livestock during recent cyclones, officials said.

During his recent visit, former United Nations general assembly president Volkan Bozkir highly appreciated Bangladesh’s efforts for Rohingyas in Bhasan Char, saying it will be another example to the world on how to deal with refugee issues. “I applaud the work done there – the quality of buildings and all the precautions.”

Bozkir hoped that this would work well for the Rohingya people, giving them a better condition in Bhasan Char.
The government has re-emphasized that Bhasan Char is completely safe and suitable for human habitation.

The 30-year-old island has all the amenities, including healthcare, clean water, options for economic activities, and cyclone shelters, it said.

The island offers enough space for the free movement of the Rohingyas.

Officials at the Foreign Affairs Ministry said it should be remembered that Rohingyas are Myanmar nationals and Bhasan Char and Cox’s Bazar camps are temporary arrangements. “Bangladesh has temporarily been hosting them purely out of the humanitarian gesture.”

“Rohingyas want to return to their homeland, Myanmar, and all need to work constructively to that end,” a ministry official said.