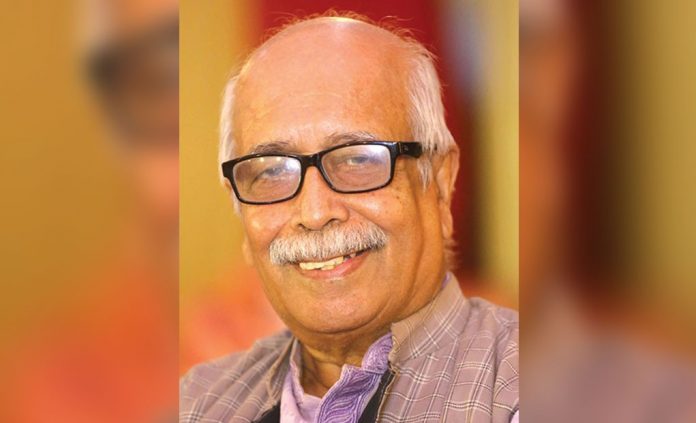 Distinguished actor, director, playwright, academic and Ekushey Padak awardee Dr Enamul Haque breathed his last at his Bailey Road residence in the capital on Monday. He was 77.

Ahsan Habib Nasim, General Secretary of Actors Equity Bangladesh, said Dr Enamul Haque was taken to Islami Bank Central Hospital at Kakrail in the afternoon as his pulse rate could not be detected. Doctors at the hospital pronounced him dead, reports UNB.

Dr Enamul Haque’s body will be taken to Bangladesh Shilpakala Academy premises for final respects to be paid to him.
President M Abdul Hamid and Prime Minister Sheikh Hasina has expressed profound shock and sorrow at the passing away of the eminent actor, who was engaged in teaching chemistry at Bangladesh University of Engineering (Buet).

In a condolence message, the head of the state said his death is an irreparable loss to the field of country’s cultural arena.

“His contribution to the development of the local culture will be remembered for long,” the president added.

Prime Minister Sheikh Hasina sought eternal peace of the departed soul and conveyed sympathy to the bereaved family members in a condolence message.

The sudden departure of Dr Enamul Haque has cast a pall of grief on the country’s cultural arena.
Dr Haque is survived by his wife Lucky Enam, two daughters — Hridi Haque and Paitri Haque — and their husbands Litu Anam and Saju Khadem, and grandchildren.

He did his bachelor’s and master’s in chemistry in 1963 and 1964 respectively, from Dhaka University.

Dr Enamul Haque earned his PhD degree from the University of Manchester in 1976 in the field of synthetic organic chemistry.

He served as chairman of the chemistry department for 15 years and as the faculty dean for two years at Buet.

The eminent actor first performed on stage while studying at Notre Dame College. He made his acting debut in the play “Bharate Chai” under the direction of Father Ganguly.

Dr Enamul Haque was a founding member of the theatre team “Nagarik Natyasampradaya”, which began its journey in 1968 at Buet campus.

In 1995, he left the group and founded “Nagorik Nattyangon”.

He acted in many plays, among which were “Dewan Gazir Kissa”, “Nurul Deen-er Shara Jibon” and “Grihabasi”.
He also wrote over 60 plays for television. Among the popular TV plays written by him are “Sheishob Dinguli” (drama based on the Liberation War), “Nirjan Shoikote” and “Ke Ba Apan Ke Ba Par”.