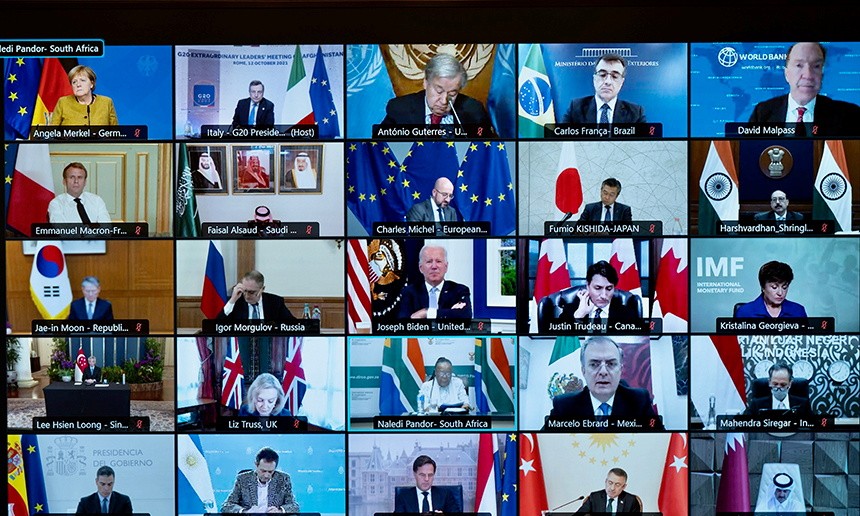 G20 leaders gathered on Tuesday for a virtual summit focused on addressing the looming humanitarian crisis in Afghanistan, with the EU kicking off proceedings by announcing a €1 billion aid package.

Shortly before the meeting began, European Commission chief Ursula von der Leyen announced an aid package to help “avert a major humanitarian and socio-economic collapse” in Afghanistan.
The money adds €250 million to a €300-million sum previously announced by the EU for urgent humanitarian needs, with the remainder going to Afghanistan’s neighbouring countries taking in Afghans fleeing the Taliban, a statement said.

It stressed the EU funds are “direct support” for Afghans and would be channelled to international organizations working on the ground, not to the Taliban’s interim government which Brussels does not recognize. EU development aid remains frozen.

Italian Prime Minister Mario Draghi had been pushing for on Tuesday’s meeting since the August takeover by the Taliban, insisting debate over solutions must go beyond the usual club of Western allies.

The G20 includes the United States, EU, China, Turkey, Russia, India and Saudi Arabia among others.
Tuesday’s conference came as the Taliban held their first face-to-face talks with a joint EU-US delegation in Qatar, as the hardline Islamists continue their diplomatic push for international support.

Hotbed of terrorism
International aid has been blocked to Afghanistan since the Taliban returned to power following the withdrawal of US and other international troops after 20 years of war.

The country’s assets held abroad have been frozen, while food prices and unemployment are rising, prompting warnings of a humanitarian disaster once winter arrives.

The United Nations and Qatar, a key broker in Afghanistan which has also hosted talks between the US and the Taliban, were also invited to on Tuesday’s closed-door talks, after which Draghi will hold a press conference in Rome.

The G20 meeting was also expected to address the issue of security, with Draghi last month calling for measures to “stop Afghanistan from again becoming a hotbed of international terrorism.”
The Taliban regime, still yet to be recognized as a legitimate government by any other country, is itself facing a threat from the Islamic State-Khorasan (IS-K), who have launched a series of deadly attacks.

Turkey’s Erdogan told G20 leaders in an address broadcast on national television that the Taliban “has not yet delivered what’s expected.”

“We have not seen necessary inclusiveness from them on the issue of humanitarian assistance, security and prevention of Afghanistan being a base of terror organizations and prevention of extremism.”
He repeated again that after hosting five million refugees, mostly from Syria but also up 420,000 from Afghanistan, his country could not take any more.

Turkey “cannot carry an Afghanistan-oriented new migration burden”, he said, adding that it was “inevitable” that Europe will be affected by the migration pressure from Turkey’s southern and eastern borders.