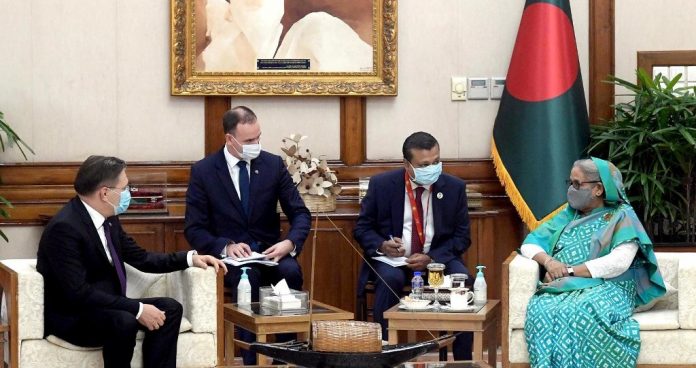 “Once the Rooppur Nuclear Power Plant (RNPP) is completed, we’ll go for setting up another in the southern region of the country. We need constant Russian support in this regard,” she said during a meeting with Rosatom State Atomic Energy Corporation Director General (DG) Alexey Likhachev at Ganabhaban in Dhaka.

Briefing the reporters after the meeting, the prime minister’s Press Secretary Ihsanul Karim said Likhachev also expressed his country’s willingness to continue support to Bangladesh’s power sector.
Rooppur power plant in Pabna, which consists of two units with a capacity of 1,200MW each, is the first nuclear one in Bangladesh. The project is being implemented by the Bangladesh Atomic Energy Commission and built with Russia’s technical and financial support.

The prime minister on Sunday had inaugurated the reactor pressure vessel installation work of the plant.’
During Monday’s meeting with Likhachev, she emphasized the importance of maintaining appropriate security measures in the plant and asked him to train Bangladeshi people in this regard.

She appreciated Russia for extending its help to construct the first-ever nuclear power plant in Bangladesh.

Talking about the Covid-19 pandemic, Hasina said the pandemic has slightly slowed down the country’s overall development, and Bangladesh is now in the process of recovery.

She recalled with gratitude the assistance and cooperation of the then Russian Federation during Bangladesh’s Independence War in 1971 and rebuilding the war-ravaged country.
The Rosatom DG highly appreciated Hasina’s strong support and guidance towards RNPP and said the cooperation between the two countries has entered an atomic sphere.

“Bangladesh will become a nuclear energy power by 2023,” he said.

Describing the present status of the project, he said: “We’ve all the technical aspects and the security measures into account.”

About the completion of the ongoing project, Likhachev said the timeline may be adjusted.
Regarding training, he said they will train Bangladeshis to run the plant and will also give attention to social development in the project area.

He said more than 20,000 Bangladeshi people are working on the project while some local companies have been given various jobs on sub-contracts. “They’re remarkable.”

The Rosatom DG also praised and thanked the Science and Technology Ministry and Atomic Energy Commission for their all-out support and cooperation.

He also thanked the Health Ministry for its cooperation in vaccinating 90% of the Russian nationals working in the project.