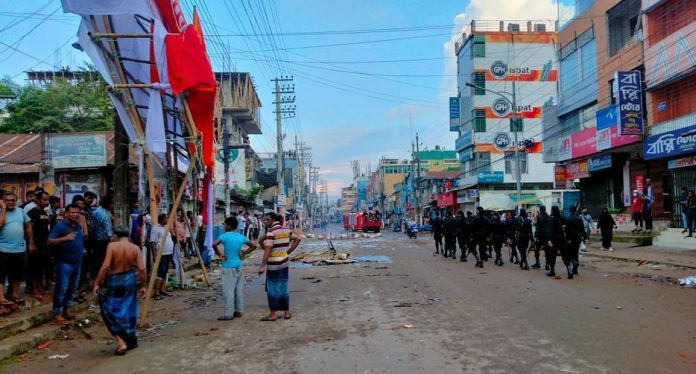 Additional police, Rapid Action Battalion (RAB), and Border Guard Bangladesh (BGB) personnel have been deployed in Comilla town to avoid further unrest over the alleged desecration of the Holy Quran.

The Ministry of Religion has instructed the local administration to investigate the incident to isolate the origin of the violence that spread across the town on Wednesday morning.

Tensions erupted among a faction of locals after news broke on social media about the alleged desecration of the Holy Quran at a Durga Puja mandap on the bank of Nanuar Dighi.
At one stage, the situation began getting out of hand and riots started spreading to a number of puja mandaps in the adjacent areas. The local administration and police came under attack when trying to bring order.
Later in the afternoon, RAB and BGB troops were deployed to bring the situation under control.

Speaking on the issue, Maulana Mizanur Rahman, president of Comilla Imam Samiti, said he urged all Muslim brothers to refrain from causing more chaos over this issue.

“The administration has sat down with us and spoke of a proper investigation over the matter,” he added.

Meanwhile, State Minister for Religious Affairs Md Faridul Haque Khan urged all to exercise restraint and refrain from taking the law into their own hands over the incident.

“Don’t take law into your own hands. Everyone should maintain religious harmony and peace,” he said in an emergency announcement on Wednesday evening.

“We’re closely monitoring the situation in Comilla. The local administration has been instructed to investigate what really happened [there].” he said.
Anyone involved in destroying religious harmony [in the country] must be brought under the ambit of law and arrangements be made to give proper punishment,” the state minister added