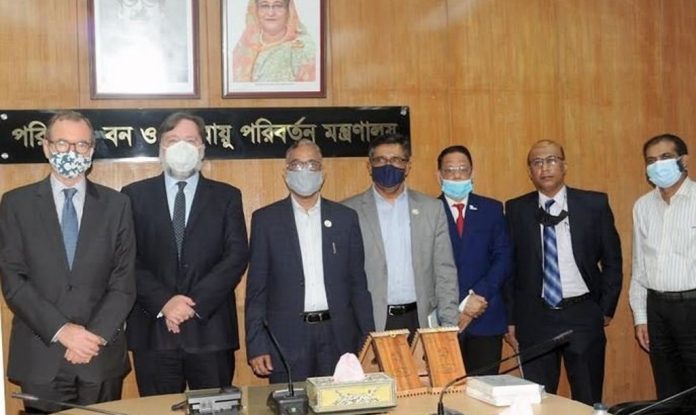 The rest of the world is looking to learn from Bangladesh’s experiences as the South Asian country has gathered vast experience in fighting against climate change.

United Kingdom’s COP26 Regional Ambassador to Asia-Pacific and South Asia Ken O’Flaherty said this during a bilateral discussion meeting with Minister for Environment, Forest and Climate Change Md Shahab Uddin on Wednesday, according to a media statement

Bangladesh, being a key player in the world, has been doing remarkably well in its action against climate change, he said.
Recently Bangladesh’s submission of an appreciable NDC with enhanced ambitions attracted Britain’s attention, the statement added.

Ken O’Flaherty said that the UK appreciates Bangladesh’s role in raising a voice for global climate action including a yearly 100- billion-dollar assistance, loss and damage and article 6.
He added that Britain expects an exemplary declaration from Bangladesh government which will encourage regional countries.

He said that Britain is working hard for practical solutions to climate change in COP26 and added that it will provide necessary assistance to Bangladesh in the areas of climate change action.

The environment minister said that Bangladesh is finalising updating the BCCSAP and formulating the NAP.

Bangladesh has drafted the Mujib Climate Prosperity Plan 2030, he said and added they have submitted the updated NDC by enhancing its contribution triple to reduce carbon emission than that of its previous one.
Bangladesh will enhance its contribution further if it is assisted with necessary sufficient fund and technology and expects an effective outcome from the COP26, the press release said.