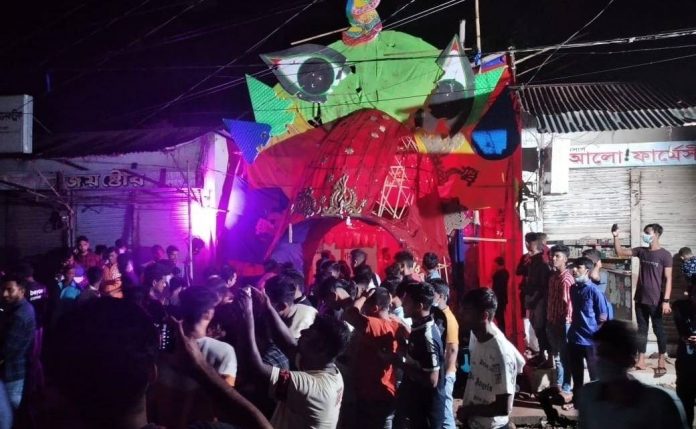 Attacks and deaths have been reported from Chandpur following the unrest in Comilla over the alleged desecration of the Holy Quran at a Durga Puja venue.

An attack was launched on Durga Puja venue at the Lakshmi Narayan Akhra temple in the district’s Hajiganj upazila on Wednesday evening.

A clash erupted between the attackers and police when law enforcers opened fire from shot guns. Soon after the incident, the local administration has imposed a Section 144 prohibiting any kind of public gathering.

Health officials have reported deaths but the police are yet to make any comment.

“The local hospital has recorded three deaths. Two of them were brought dead while another died at the hospital,” said Chandpur Civil Surgeon Shakawat Ullah.

“We have referred some of them for advanced treatment,” he said.

He, however, declined to comment on the deaths. “The civil surgeon will brief the media on this matter.”

The attacks on the temple at Hajiganj Upazila around 8pm was launched from a procession, said Ruhi Das Banik, the president of the Hajiganj Puja Organizing Council.

“Reports of attacks on temples came in from several other villages,” he said.

Police fired teargas shells and shots in the air to bring the situation under control. The police action led to the clash. Hajiganj police OC Harunur Rashid said that they had detained seven people from the spot.

“The situation at Hajiganj bazar is now under control. At least 17 policemen have been injured. But we are getting reports of attacks and vandalism from elsewhere. We are trying our best to deal with the situation,” said OC Harunur Rashid of the Hajiganj police station.

Chandpur district police chief also confirmed of the attacks on temples.
We are yet to confirm how many temples were attacked. But several law enforcers have been injured,” said Superintendent of Police Milan Mahmud.

According to Deputy Commissioner Anajana Khan Mojlish, at least two platoons of BGBs were deployed on Wednesday night.

“Additional forces from the BGB will deployed on Thursday and they will remain until the puja ends,” she said.

On Wednesday morning, tensions erupted in Comilla among a faction of locals after news broke on social media about the alleged desecration of the Holy Quran.
At one stage, the situation began getting out of hand and riots started spreading to a number of puja venues in the adjacent areas. The local administration and police came under attack when trying to bring order.

Although the situation calmed down in Comilla in the afternoon, attacks on puja venues were reported from the adjacent Chandpur district in the evening.