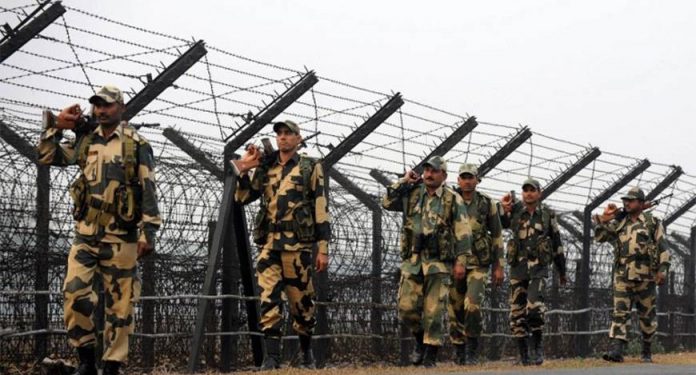 In a major international border-related move, India has increased the jurisdiction of the Border Security Force (BSF) empowering its officers to make arrest, search and seizure up to an area of 50 km in its states that share borders with Pakistan and Bangladesh.

The jurisdiction has been extended from 15 km to 50 km in West Bengal, Punjab and Assam, according to media reports.

The move on Monday is meant to “improve the force’s’ operational efficiency” and “crack down on smuggling rackets”, officials told The Indian Express.
But the decision triggered furious reactions from opposition-ruled Punjab and West Bengal, which described it as an “irrational decision”, a “direct attack on federalism” and an attempt to “interfere through Central agencies”.

In a gazette notification issued Monday, the Home Affairs Ministry said it was amending an earlier notification of 2014 on jurisdiction of the BSF to exercise its powers in states where it guards the international border.

Incidentally, the BSF’s jurisdiction in the international border along Gujarat has been reduced from 80 km to 50 km. A Union Home Ministry official said the changes were made under the BSF Act-1968, following suggestions from the BSF, and that the aim was also to keep the force’s operational jurisdiction uniform in these states.

Punjab Chief Minister Charanjit Singh Channi tweeted: “I strongly condemn the Indian government’s unilateral decision to give additional powers to BSF within 50 km belt running along the international borders, which is a direct attack on federalism. I urge the Union Home Minister @AmitShah to immediately rollback this irrational decision.”

Congress MP Manish Tewari tweeted that the Centre’s decision “transgresses upon Constitutional public order and policing remit of States” and that “Half of Punjab will now fall under BSF jurisdiction”.

He pointed out that under the BSF Act, “Section 139 (ii) gives sweeping powers of arrest to BSF. It has powers of preventive arrest under Section 139 (1) & post offence arrest under 139 (ii). No mention of consultation with local police. Scheme of Act & its implementation regime needs to be studied.”

Punjab Home Minister and Congress leader Sukhjinder Singh Randhawa compared the move to the imposition of “internal emergency”, and one that casts aspersions on the “patriotism of Punjabis”.

“There is a feeling that the Government wants to teach a lesson to Punjab for raising its voice against the farm laws. I urge the Centre not to allow the communal harmony to be destroyed,” he said. Randhawa said he has written to Prime Minister Narendra Modi and Union Home Minister Amit Shah to reconsider the decision.

Randhawa also pointed to “difficulties” on the ground. “We have a piece of land in Chandu Wadala village near Kalanaur,which falls under the first line of defence. I, being the home minister and deputy chief minister of Punjab, cannot go to my village. I have to seek permission from the BSF commandant. Even if permission is granted, my security cannot accompany me,” he said.

Jakhar had tweeted: “Be careful what you ask for! Has @CHARANJITCHANNI unwittingly managed to hand over half of Punjab to Central govt. 25000sq km (out of total 50,000sq km) has now been placed under BSF jurisdiction. Punjab Police stands castigated. Do we still want more autonomy to states?”

Randhawa rejected Jakhar’s tweet. “He should have spoken to me. The CM had only said that the borders should be sealed so that drones and drugs should be stopped,” he said.

Tweeting on Amarinder’s behalf, his media advisor posted: “Our soldiers are being killed in Kashmir. We’re seeing more & more weapons & drugs being pushed by Pak-backed terrorists into Punjab. BSF’s enhanced presence & powers will only make us stronger. Let’s not drag central armed forces into politics.”
He added: “Partisan considerations can’t & shouldn’t dictate our stand on issues of national security…We’ve to rise above politics when India’s security is at stake, as it is now.”

Meanwhile, Shiromani Akali Dal president Sukhbir Singh Badal hit out at both the Centre and the Punjab government for what he described as “Central rule by proxy”.

A Home Ministry official, however, rejected the allegations and said that the “sole aim of the notification is to improve operational efficiency of the BSF and help them crack down on smuggling rackets”.

Asked why the BSF’s jurisdiction has been reduced in Gujarat, the official said: “They had 15 km jurisdiction in some states and 80 km in Gujarat. So the idea was to make it uniform. In Gujarat, such a large operational area is not required since the border region guarded by the BSF is largely uninhabited with miles of Rann of Kutch.”
The senior BSF officer said: “If Punjab has the problem of drugs and arms smuggling, Assam and West Bengal pose new challenges in the form of cattle and fake currency smuggling. These borders are also prone to illegal migration. We have been getting inputs about illegal activity deep in the hinterland but our hands were tied beyond 15 km.”