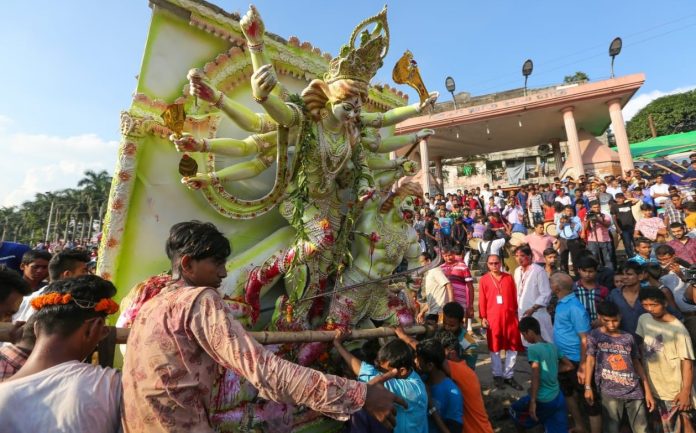 Mandaps across Bangladesh decorated with beautiful idols, showcasing the Hindu goddess in all her glory

Durga Puja, the biggest Hindu festival, will come to an end Friday with the immersion of the goddess Durga’s idols across the country.

Devotees will throng Puja mandaps to celebrate Bijoya Dashami, the last day of the festival, recite mantras, offer flowers to the goddess Durga and pray for her blessings.

Mandaps across the country have been decorated with beautiful idols, showcasing the goddess in all her glory.

Bijoya Dashami is a special ceremony to reaffirm peace and good relations among people.

On this day, Hindu families visit each other to share sweetmeats.
As part of the main rituals of Dashami Puja celebrations, female devotees will place vermilion at the feet of Durga at mandaps and temples across the country, which is part of the traditional “Shidur Khela”. The ritual follows Hindu women putting the vermilion on each other aspiring for prosperity in lives, as a tribute to the power of Durga.

This year, the religious festival is being celebrated at some 32,118 puja mandaps throughout the country, including the capital.

In the capital, thousands of people are set to throng the Buriganga River Friday to observe the final phase of the festival — the immersion of the goddess Durga.

Devotees in tearful eyes will bid farewell to the mother deity and her children —
Lakshmi, Saraswati, Kartik and Ganesh — through the immersion of their idols in water wishing Durga’s return next year.

The five-day festival started on October 11 with the incarnation (bodhon) of the goddess Durga marking Sashthi amid strict security measures across the country.

Durga Puja, the annual Hindu festival also known as Sharadiya (autumnal) Durga Utsab, is the worship of “Shakti” (divine force) embodied in goddess Durga. It symbolizes the battle between good and evil where the dark forces eventually succumb to the divine.