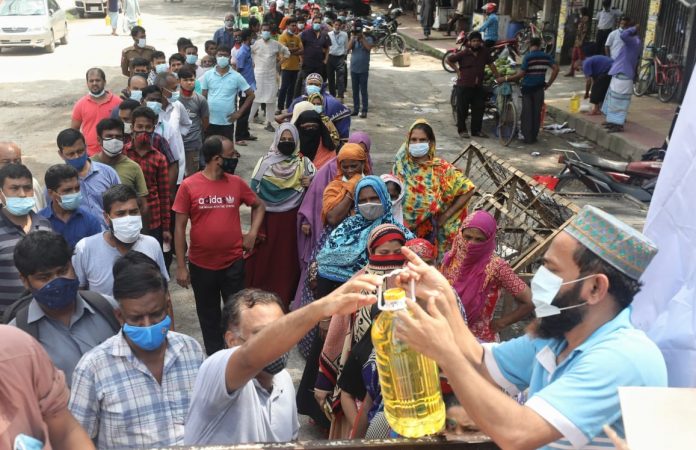 Bangladesh not out of impact range

From beef bowls in Tokyo to chicken fillet rolls in London, consumers are beginning to feel the pinch from the surge in costs washing over the global economy.

The rebound in economic activity from coronavirus restrictions has exposed shortages across the supply chain with companies scrambling to find workers, ships and even fuel to power factories, threatening a nascent recovery, reports Reuters.

Bangladesh is also feeling the heat.

The rise in global fuel prices is leading to price hikes of essentials in the country as well, said economists and local businesses.
The poor, new-poor, and people with fixed incomes will bear the brunt of the global fuel price hike as this will push up transportation costs, electricity production costs, labour costs, and of course, food costs,” said Muhammad Shahadat Hossain Siddiquee, professor of Economics at the University of Dhaka.

“The spectrum of impact is very wide as oil is integrated with every sphere of life,” he said, adding that as the prices of essential commodities go up, fixed-income groups will push for higher wages.

Siddiquee also noted that the manufacturing and export industries will also be hampered.

Businesses say the prices of essentials are rising due to rising transport costs for import-dependent goods.
If the price of oil does not drop, the price of these products is unlikely to go down, they added.

Afzal Hossain, a grocer at Hatirpool wet market said the price of edible oil has been on the rise due to this issue, along with the prices of sugar, flour and onions.

SM Nazer Hossain, vice-president of Consumer Association of Bangladesh (CAB), said: “The global fuel price will also affect the poor, especially those who lost jobs and businesses amid the pandemic.”

Covid-19 has already pushed up the prices of commodities, now the fuel price hike will just add to it, he said.

Mahtab Uddin, an economic researcher at Bangladesh Economic Association (BEA), said: “Amid the pandemic oil production slowed down, now fuel demand has increased. The oil producers now increased the prices. Developing countries will suffer in the long term.”
When garment workers and transporters will demand wage hikes due to the price hike of commodities, it may create tension in the economy, he added.

Shahidullah Azim, vice president of the BGMEA, said that the current surge of fuel prices has had no effect on our country’s RMG industry yet.

“The apparel sector of our country is mainly dependent on electricity and gas. The sector is facing the impact of the gas crisis in the country and the LNG crisis in the international market,” he added.

However, as there is an energy crisis in the world market including fuel, coal, and gas, it is having an impact on the overall economic activity. So, even if there is no direct effect, there can be indirect effects too, he added.

Commerce Minister Tipu Munshi said that no one can stop the influence of the international market — the effects will be felt in the domestic markets too.
However, the prices of daily necessities will definitely fall within the purchasing power of general people, he added.

Earlier, the Commerce Ministry had sent a letter to the NBR on the withdrawal and reduction of tariffs to keep the prices of daily commodities, especially imported goods, in check.

Britain’s biggest chicken producer warned that the country’s 20-year binge on cheap food is coming to an end and food price inflation could hit double digits due to the tidal wave of costs.

As it emerges from Brexit and Covid-19, the world’s fifth largest economy faces an acute shortage of warehouse workers, truckers and butchers, exacerbating global supply chain strains.
The days when you could feed a family of four with a 3 pound ($4) chicken are coming to an end,” Ranjit Singh Boparan, owner of the 2 Sisters Group, said in a statement on Thursday.

Even in Japan, where weak growth has meant that prices of many things – including wages – haven’t risen much in decades, consumers and businesses are facing a price shock for basics such as coffee and beef bowls.

In the United States, President Joe Biden on Wednesday urged the private sector to help ease supply chain blockages that are threatening to disrupt the US holiday season.
Biden said the Port of Los Angeles would join the Port of Long Beach in expanding round-the-clock operations to unload an estimated 500,000 containers waiting offshore, while Walmart, Target and other big retailers would expand their overnight operations to try to meet delivery needs.

With winter approaching in some parts of the world, the prospects look bleak as power supplies dwindle.

As cold weather swept across northern China, coal prices held near record highs, with power plants stocking up on the fuel to ease an energy crunch that is fuelling unprecedented factory gate inflation in the world’s second-largest economy.

So far there are few signs of any reprieve in energy costs, with oil prices climbing again on Thursday on a bigger-than-expected draw in US gasoline and distillate stocks.

The rise was also supported by expectations that soaring natural gas prices as winter approaches will drive a switch to oil to meet heating demand, with Brent crude futures hitting $83.85 a barrel at 0647 GMT.

The International Energy Agency (IEA) said that the energy crunch is expected to boost oil demand by half a million barrels per day (bpd) and could stoke inflation and slow the world’s recovery from the Covid-19 pandemic.
Higher energy prices are also adding to inflationary pressures that, along with power outages, could lead to lower industrial activity and a slowdown in the economic recovery,” the Paris-based agency said in its monthly oil report.

In Germany, the country’s top economic institutes cut their joint forecast for 2021 growth in Europe’s largest economy to 2.4% from 3.7% as supply bottlenecks hamper output, confirming a Reuters story.

In response to the growing energy price crisis, the White House has been speaking with US oil and gas producers in recent days about helping to bring down rising fuel costs, two sources familiar with the matter told Reuters.

In the United States, the average retail cost of a gallon of gas is at a seven-year high, and winter fuel costs are expected to surge, according to the US Energy Department. Oil-and-gas production remains below the nation’s peak reached in 2019.
Chips still down

Dutch navigation and digital mapping company TomTom warned that supply chain problems in the auto sector could last until the first half of 2022 after it reported a bigger than expected quarterly core loss.

Auto production has been hit by a global shortage in semiconductor chips, which has forced carmakers still recovering from coronavirus disruptions to halt production again.

“Collectively we have underestimated how big the supply chain issues, and especially for semiconductor shortages, have been or have become”, TomTom’s Chief Financial Officer Taco Titulaer told Reuters on Thursday.

The soaring demand is a boon for some companies. Taiwan’s TSMC, the world’s largest contract chipmaker, reported a near 14% jump in third quarter profit.
TSMC and Taiwan in general have also become central in efforts to resolve the pandemic-induced global chip shortage, which has hurt manufacturers of smartphones, laptops and consumer appliances as well as automakers.

Some companies, such as Toyota Motor Corp are intensifying efforts to restart production, with the Japanese carmaker hoping to do so in December with a rebound in shipments from pandemic-hit suppliers, three sources told Reuters.

Toyota has asked suppliers to make up for lost production so it can build an additional 97,000 vehicles between December and the end of March, with some considering additional weekend shifts to do so, the sources said.

In Britain, the owner of discount retailer Poundland warned that pressure on global supply chains has increased with reduced raw material availability leading to commodity inflation.

Pepco Group said that this had been compounded by constrained container capacity which significantly increased shipping costs from the final quarter.

But in some rare good news for consumers, Pepco said it won’t pass most of the higher costs on.
source:DhahaTribune