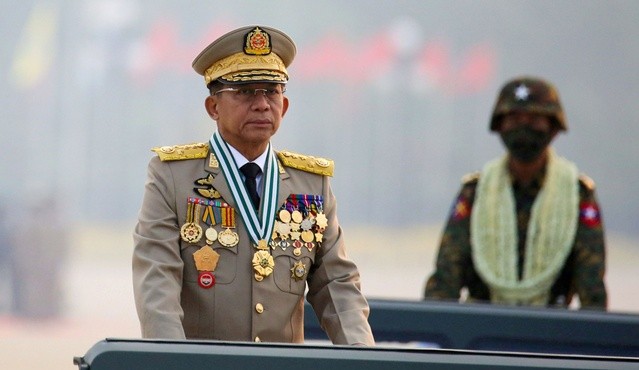 The Association of Southeast Asian Nations agreed on Friday to sideline Myanmar’s military ruler from a leaders’ summit this month, sources said, a rare tough stand by a bloc known for its policy of engagement and non-interference.
Foreign ministers made the decision at a special meeting called to address the failure of Myanmar’s military to follow a peace process it agreed to with ASEAN five months ago, aimed at tackling a bloody crisis triggered by its Feb 1 coup.

More than 1,000 civilians have been killed by Myanmar security forces and thousands arrested, according to the United Nations, during strikes and protests over a coup that ended a decade of tentative democracy and prompted international condemnation and sanctions.

Five sources with knowledge of what was decided at the meeting said junta chief Min Aung Hlaing would not be invited to the Oct 26-28 leaders’ summit and a non-political figure in Myanmar would be asked to attend instead.

Two sources told Reuters that ASEAN ministers agreed that should the military not accept that arrangement, Myanmar’s seat at the summit table would be left vacant.

ASEAN made no official announcement about what was resolved at the meeting and chair Brunei will issue a statement on Saturday. Myanmar’s military spokesman did not answer calls seeking comment.

The move to exclude the junta would be unprecedented in the recent history of ASEAN, a grouping long criticised for being toothless and for failing to rein in members with leaders accused of atrocities, subverting democracy and persecuting political opponents.

International pressure had been building on ASEAN to take a tougher position over Myanmar’s failure to take the agreed steps to end the violence, allow humanitarian access and start dialogue with its opponents.

Myanmar has been arguably ASEAN’s most divisive issue since it joined the bloc in 1997 as a military dictatorship lambasted by the West for its iron-fisted rule, testing ASEAN’s unity and denting its international credibility.

Blocking Min Aung Hlaing would be a big step for the bloc, which has a policy of staying out of each other’s affairs and has long discouraged sanctions and other measures to isolate Myanmar.

Though not formally recognised as an ASEAN leader, Min Aung Hlaing was invited to a leaders’ meeting in April where a peace roadmap was agreed. His attendance outraged members of the elected government of ousted leader Aung San Suu Kyi, which was not invited.

Indonesia’s Foreign Minister Retno Marsudi on Friday advocated an even tougher stand to what the sources said was agreed at the meeting.

On Twitter, Marsudi said Indonesia proposed Myanmar “should not be represented at the political level until Myanmar restores its democracy through an inclusive process”.

The United States, Australia, Canada, South Korea, Britain and the European Union, among others, issued a joint statement on Friday expressing concern about the “dire situation” in Myanmar while backing ASEAN’s mediation effort.
A peaceful and non-violent resolution of the crisis and return to democracy is a matter of urgency,” it said in the statement, that made no mention of Friday’s meeting.

“We reaffirm our strong endorsement of ASEAN’s ongoing efforts to chart a course out of the current crisis.”

Myanmar has said it is committed to working with ASEAN and to restoring order in the country to facilitate a return to democracy.

Erywan had decided not to visit Myanmar this month, several of the sources said.

He has been insisting he be allowed to meet all parties in Myanmar to find a way out of its crisis, including Suu Kyi, who has been detained since the coup on multiple charges.

But Zaw Min Tun, the Myanmar government spokesman, this week said Erywan would be welcomed in the country but would not be allowed to meet Suu Kyi because she is charged with crimes.
>>Reuters