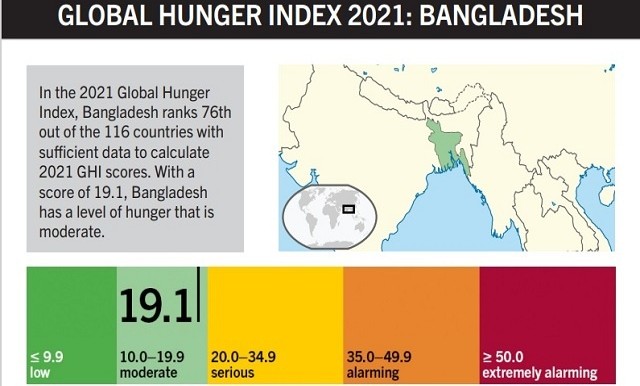 The report detailing various aspects of the index describes Bangladesh as an “example” among the several success stories of countries that have reduced hunger substantially over recent years and decades.

Fourteen countries have seen a 25 percent reduction or more between their 2012 and 2021 GHI scores.

A high GHI score can be evidence of a lack of food, a poor-quality diet, inadequate child caregiving practices, an unhealthy environment, or all of these factors. The GHI ranks countries on a 100-point scale, with 0 being the best score (which means no hunger) and 100 the worst.

Bangladesh has experienced an “impressive” decline in GHI scores since 2012, dropping from 28.6 points, considered “serious”, to 19.1 points, considered “moderate”, the report said
Jointly published by Concern Worldwide and its partner Welthungerhilfe, the 2021 GHI was published on Friday. The report categorises countries into moderate, serious, or alarming hunger levels, using the most recently published official data from a range of specific sources, including FAO, UNICEF and WHO.
Bangladesh’s child stunting rate fell substantially in recent decades, from 51.1 percent in 2000 to 28.0 percent in 2019, according to the report.

“These improvements are underpinned by the government’s firm commitment, determination, and action to tackle malnutrition as part of the country’s path toward developed-country status by 2041.”

Bangladesh moved to the 76th position from 75th in a year, but this can be considered an improvement as the number of countries in the index also increased from 107 to 116. Belarus ranked first in the latest index while Somalia, Syria and South Sudan are at the bottom.

India slipped to the 101st position on the index, from its 2020 position of 94th. Besides Bangladesh, Pakistan and Nepal are among the South Asian countries ahead of India.
Globally, the latest GHI points to a dire hunger situation in a world coping with multiple crises. Progress toward Zero Hunger by 2030, already far too slow, is showing signs of stagnating or even being reversed.

The fight against hunger is dangerously off-track as global progress is slowing, and hunger remains stubbornly high in some regions.
As violent conflict drives hunger, breaking the links between conflict and hunger can advance both food security and peace, the report suggested.

Working together, actors such as states, community groups, local and international nongovernmental organisations or NGOs, and United Nations agencies can create conditions for food security and sustainable peace.

“Finally, it is crucial to address conflict on a political level and prosecute those who use starvation as a weapon of war.”