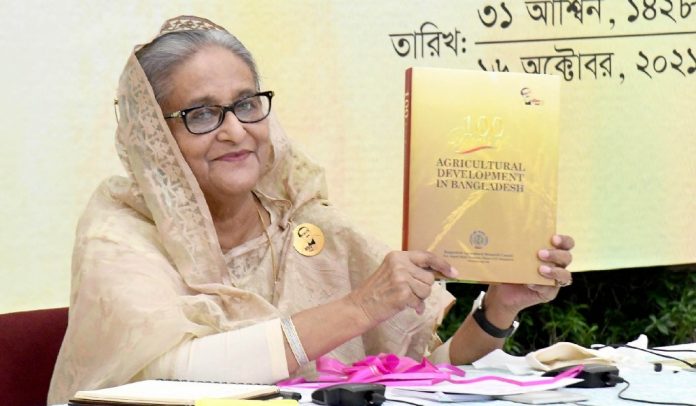 Prime Minister Sheikh Hasina on Saturday urged all to stop wasting food as many countries in the world are going to face a famine-like situation.

“Wasting food has to be reduced. There’s a scarcity of food on one side of the world and heavy wasting on the other… there shouldn’t be any food wasting,” she said.

Sheikh Hasina said this while addressing the World Food Day held at Hotel InterContinental joining from her official residence Ganabhaban.
The theme of this year is “Our actions are our future — Better production, better nutrition, a better environment and a better life”.

The prime minister urged scientists to think about the reuse of excess food and conduct research in this regard.

She asked all to remain vigil so that Bangladesh never runs into a food crisis and no one can conspire to push the country into a famine. “All need to be watchful. Inshallah, we’ll fulfil the demand for food and ensure food security.”

Hasina added that there will be no food scarcity in the country as the government has taken numerous programmes and projects in this regard.

Underlining the importance of research, she said, “Research works need to be carried forward as this is a continuous process.”
Talking about various types of research-driven inventions that the Bangladeshi scientists achieved, including drought resilience and flood resilience rice for ensuring food security in the country, she said, “I think the scientists of Bangladesh are the best in the world.”
The prime minister said the government has introduced a land zoning system to protect arable lands of the country. “We’ll surely go for development but by preserving the arable lands,” she said.

Hasina mentioned that the government is taking various types of preparations so that the country does not lag behind in food production during the upcoming fourth industrial revolution.

“Our aim is to ensure food security along with nutrition. For that, we’ve given importance to protein production,” Hasina said.
Briefly describing the remarkable success in Bangladesh’s food production in the last 12 years, Hasina said Bangladesh will export food items to earn foreign exchange after fulfilling the local demand.

A documentary on food production of the country was screened at the programme.

Prime Minister Hasina also unveiled a book titled ‘Agricultural Development in Bangladesh’ and a portrait of Father of the Nation Bangabandhu Sheikh Mujibur Rahman with a new variety of paddy ‘Bangabandhu Rice-100’ invented by BIRRI scientists.
The prime minister also directed all concerned to give due importance to marketing and processing of agriculture products alongside boosting their production.

She urged the farmers to utilize their land saying that not a single inch of land should be left uncultivated.

Elaborating various agriculture and farmer-friendly measures taken by her government during 1996-2001 and since 2009, Hasina said Bangladesh has now become a self-reliant country in food production due to the various pragmatic steps.

The prime minister expressed satisfaction that the production of vegetables, fruits, onions, dairy and other agriculture items has increased substantially and those are now available throughout the year.
Besides, she said, Bangladesh now ranks 11th in the world in terms of food production due to the coordinated efforts of the scientists, farmers and time-befitting steps of the government.

The prime minister mentioned that all concerned will have to focus on quality and standard of food products and their processing, not only for the country but also for their exports.