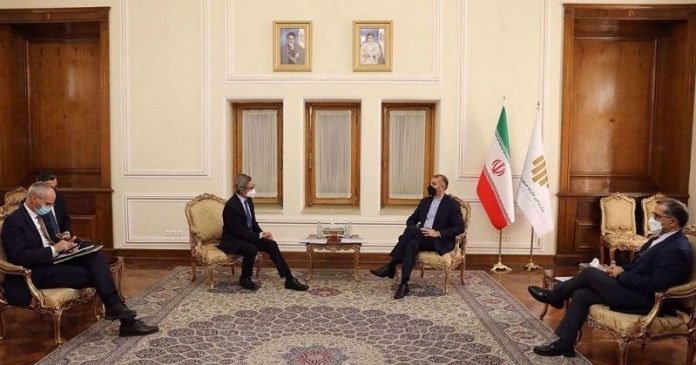 The Iranian foreign minister has condemned recent deadly terrorist attacks in Afghanistan, raising the alarm at the rise of Daesh and other Takfiri terror outfits in the conflict-ridden South Asian country.

According to Press TV, Hossein Amir-Abdollahian made the remarks during a meeting with Peter Launsky-Tieffenthal, Secretary-General of the Austrian Foreign Ministry, in Tehran on Saturday.

The top Iranian diplomat warned that the rise of Daesh and other Takfiri terrorist groups, following a change of government in Afghanistan, was dangerous.

The terror attacks happened almost two months after the Taliban took control of Afghanistan amid swift advances on the ground, which many attribute to a hasty withdrawal of US-led foreign forces.

He further called the European Union to take “a more responsible approach” in protecting the rights of Afghans displaced by violence.

Moreover, he expressed hope for a growth in economic and trade ties between the two countries, appreciating Austria for providing COVID-19 vaccines to Iran.

Launsky-Tieffenthal, for his part, praised the friendly relations between Tehran and Vienna, and expressed hope that the 2015 nuclear deal, known as the Joint Comprehensive Plan of Action (JCPOA), would be revived with the participation of all parties.

He also denounced the latest terrorist acts in Afghanistan, saying Iran and Austria “have common concerns” about Daesh.

Additionally, he stressed Austria’s support for meetings of Afghanistan’s neighbors to help resolve the country’s problems.