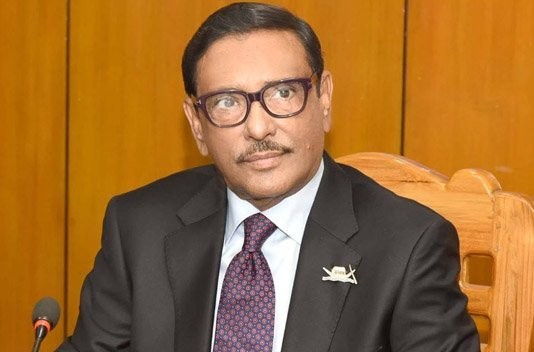 Awami League General Secretary and Road Transport and Bridges Minister Obaidul Quader on Sunday labelled the BNP as the “number one” patron of the communal forces.

“The BNP is the father of communalism and all wrongdoings in the country,” he told a scholarship giving and study material distributing ceremony marking the 58th birthday of Sheikh Russel at Dhaka University Laboratory School and College.

Quader said wrongdoers do not have any party; they are miscreants.
He stated that the BNP is invalid without Jamaat, and Jamaat’s reliable umbrella is the BNP. This tie is so strong that it will never be severed.

He urged all to remain alert as the communal evil forces are mounting up ahead of the next general elections and they can carry out severe attacks whenever they will get any scope.
Noting that the defeated forces of 1971 had carried out the 1975 carnage, after the assassination of Father of the Nation Bangabandhu Sheikh Mujibur Rahman, the poisonous tree of communal evil forces has spread its root deep into the soil. Though it seems the evil forces are inactive, they are very much active behind the scene, he mentioned.

Later, Quader distributed scholarships and donations from ‘poor fund’ and study material among the students.