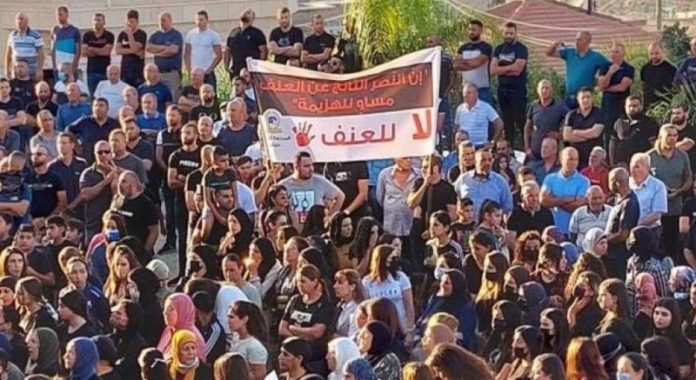 Hundreds of Palestinians have held a mass demonstration to express their deep resentment over rising levels of misdeed and violence in their communities and the Zionist entity’s collaboration with criminal gangs.

According to reports, the protesters converged on Land Day Square in Deir Hanna, located 23 km southeast of Acre, on Saturday evening and marched towards a funeral house in the town in support of young Palestinian man Jihad Hammoud, who was martyred in a shooting attack by a group of unknown gunmen last week.

Two other Palestinians had also been injured in the same incident.

Spiraling levels of crime and violence against the Palestinian communities as well as the Israeli police’s inaction in the face of the violence has outraged the Palestinians living in Occupied Terrorists, prompting tens of thousands of them to stage mass demonstrations.

Protesters took to the streets in the city of Umm al-Fahm northwest of Jenin on March 5 in what some reporters described as the largest rally against violence and organized crimes since the 1980s.

The demonstrators said Israeli regime forces refused to crack down on powerful criminal organizations in the occupied territories.

In recent years, there has been a steep rise in crime and violence against Palestinians across the occupied territories.

Moreover, the Arab Parliament has called for the formation of an international fact-finding committee to launch an inquiry into the situation of Palestinians being held behind bars in Israeli detention centers.

The legislative body of the Arab League said in a statement on Saturday that members of the committee should visit Israeli prisons, and learn about violations of the rights of Palestinian prisoners, especially those on hunger strike in protest at their detention conditions.

“The Israeli regime has not returned the bodies of 68 martyred Palestinians to their families since 2016, and has buried 254 bodies in mass graves,” the statement read, stressing that Israeli forces must be pursued and punished for their illegal acts and crimes against humanity.

The Arab Parliament also called on lawmakers worldwide, regional parliamentarians, the Inter-Parliamentary Union (IPU), Secretary-General of the United Nations António Guterres, the International Committee of the Red Cross and human rights organizations to take immediate actions to save the lives of Palestinian prisoners.

There are reportedly more than 7,000 Palestinians held at Israeli jails.Hundreds of the inmates have been apparently incarcerated under the practice of administrative detention