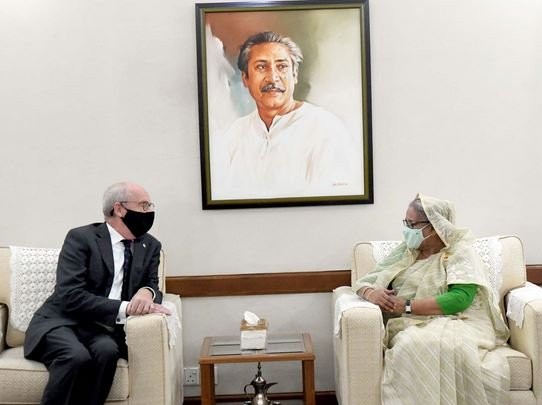 Some of the refugees are destroying the environment and forest resources of Cox’s Bazar, she says

Prime Minister Sheikh Hasina on Sunday said the Rohingyas have become a huge burden for Bangladesh as there has been no progress in their repatriation since their massive influx into Bangladesh three years ago.

“They have become a huge burden for Bangladesh. The environment and forest resources in Cox’s Bazar are getting destroyed,” she said when newly-appointed Ambassador of the Netherlands Anne Gerard Van Leeuwen met her at her official residence Ganabhaban.

The ambassador said he spoke to various people, including refugees and NGO
activists, and all of them think that the solution to the Rohingya crisis lies there in Myanmar.

Sheikh Hasina appreciated the contributions of the Netherlands for the development of the country.

She mentioned Father of the Nation Bangabandhu Sheikh Mujibur Rahman’s stance to develop Bangladesh through land reclamation, like the Netherlands.

She thanked the Netherlands for their cooperation in formulating the Delta Plan 2100.

She also recalled her visit to the Netherlands and said that she was overwhelmed to see the Green House system to produce and preserve agricultural items. “We are an agri-based country and we can adopt that system,” she said.
Sheikh Hasina said the government is dredging more rivers in the country to preserve water.

About airports, she said the government is upgrading the Cox’s Bazar International Airport to attract more tourists to the longest unbroken sandy sea-beach of the world.

She also mentioned that 100 economic zones are being developed in different parts of the country to invite more domestic and foreign investments.

He has travelled Bangladesh by air and witnessed the landscape of the country. This landscape has similarities with his own country, he added.