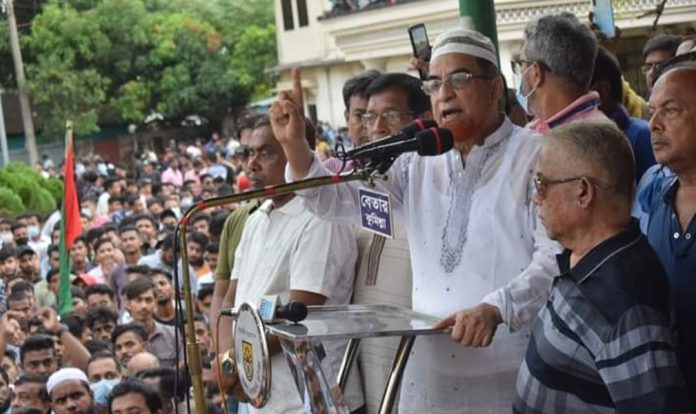 He was speaking at a public event organized by the metropolitan unit Awami League at Comilla Town Hall on Monday afternoon.

He said Gobinda Chandra needed to be arrested to get to the truth of who was behind the attacks on Hindu temples and homes on October 13.
The Awami League leader said: “Just as the Muslim fundamentalists are spreading communal hatred in the country, the Hindu fundamentalists are also doing the same.”

He said that people like Gobinda Chandra should be arrested for making such provocative remarks.

Issuing a warning to people who burned down Hindu houses in Rangpur, Bahauddin said: “No one will be exempted. Your houses will be burned down just like you burned down other people’s houses.”
At an online talk show on Saturday, Gobinda Chandra alleged that the Comilla attacks had taken place due to a political rift between Comilla Sadar MP AKM Bahauddin Bahar and Mayor Monirul Haque Sakku.

On October 13, tensions erupted among a faction of locals in Comilla after news broke on social media about the alleged defamation of the Quran at a Durga Puja venue on the bank of Nanuar Dighi.
The incident created a ripple effect across the country that caused hundreds of Hindu temples, houses and businesses being attacked and vandalized.