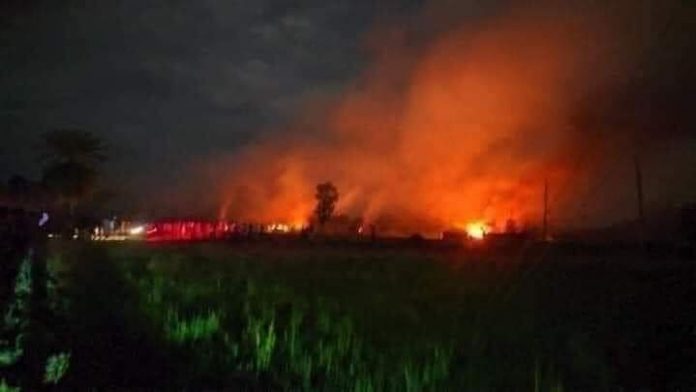 A group of people attacked Hindu homes at a village in Rangpur’s Pirganj upazila over a post on the social media that allegedly dishonoured religion.

At least 20 home were completely burnt in Majhipara’s Jelepolli at Ramnathpur Union in the attack that was carried out late on Sunday.

According to the local Union Parishad chairman some 65 Hindu home were torched during the attack. “They attacker belonged to the local units of the Jamaat-e-Islami and its student wing Islami Chhatra Shibir,” Chairman Md Sadequl Islam told media .
Police said tensions erupted after some people alleged that a Hindu man posted a religiously abusive content on Facebook.

“Police reached the spot soon after tensions mounted and stood guard around the home of the young man. We could save that house but attackers torched some 15 to 20 nearby houses,” Assistant Superintendent of Police Md Kamruzzaman told media .

The Fire Service that the incident was reported around 9.50pm. Firefighting units from Pirganj, Mithapukur and Rangpur city rushed to put out the flames. They are at the scene until 3am on Monday. There were no immediate reports of casualties.
Dozens of people have been arrested in connection with the attacks and the spreading of communal hatred on social media amid the Durga Puja, the largest festival of Hindus. Security was ramped up at houses of worship, and Border Guard Bangladesh troops were dispatched to more than two dozen districts. The 10-day festival came to a close on Friday with the immersion of Durga idols.

At least four people were killed in police shootings during attack on puja locations in Chandpur’s Hajiganj on Wednesday while in Noakhali’s Choumuhani, attacks on Hindu temples left two people dead on Friday.

The government and law enforcement agencies have described the incidents as “planned” in a bid to destabilize the country.