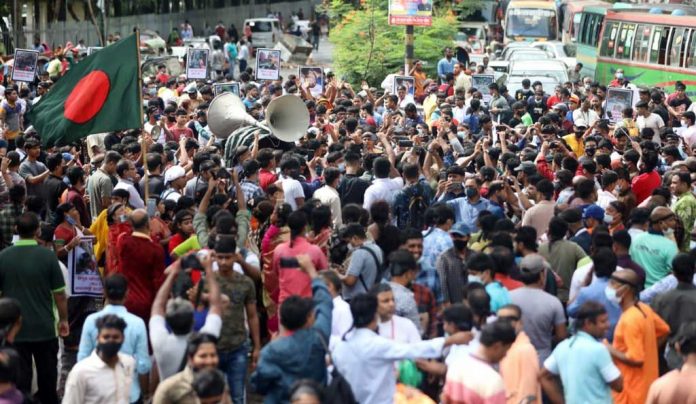 Hundreds of people, including Hindus and Dhaka University students, take to the street protesting the attacks on temples and puja venues during this year’s Durga puja

Religious groups, joined by Dhaka University students, have blocked the Shahbagh intersection in Dhaka on Monday to protest the attacks on temples and puja venues in different parts of the country during this year’s Durga Puja.

Around 10.30am, hundreds of university students gathered at the key intersection in the capital and joined a group of protesters under the banner Swamibag Ashram ISKCON, who held a rally at the press club earlier in the day and marched to Shahbagh.

Students from Jagannath Hall and other dormitories gathered at Dhaka University’s TSC before coming to Shahbagh.
Addressing the demonstrating students, Jagannath Hall Provost Mihir Lal Saha, said: “The spirit of independence of our country is not being upheld anymore.”

He sought the prime minister’s intervention for bringing the perpetrators to justice.

The demonstration at Shahbagh has led to heavy traffic congestion in Paltan, the Science Laboratory area, Bangla Motor, and the road leading to the TSC.

Communal tensions have gripped Bangladesh over the past few days following allegations of the Quran being dishonoured at a Hindu temple triggering violence in several districts across the country.
Dozens of people have been arrested in connection with the attacks and the spreading of communal hatred on social media the largest festival of Hindus. Security was ramped up at houses of worship, and Border Guard Bangladesh troops were dispatched to more than two dozen districts. The 10-day festival came to a close on Friday with the immersion of Durga idols.

At least four people were killed in police shootings during attack on puja locations in Chandpur’s Hajiganj on Wednesday while in Noakhali’s Choumuhani, attacks on Hindu temples left two people dead on Friday.

The government and law enforcement agencies have described the incidents as “planned” in a bid to destabilize the country.