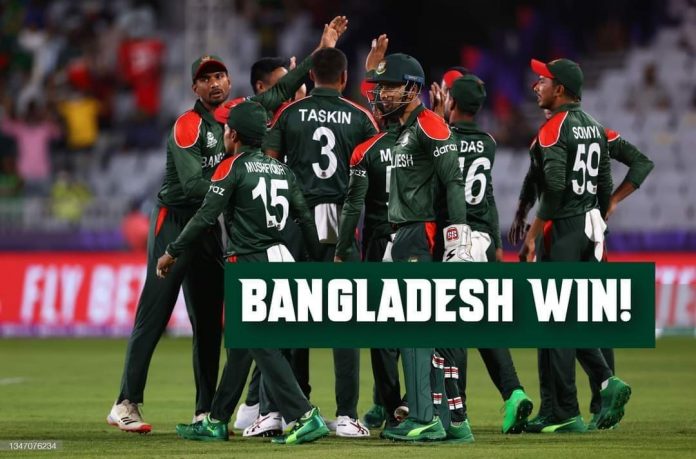 Bangladesh kept their hopes alive in the T20 World Cup after securing the first win in Group B of the qualifying round.

Bangladesh Tuesday defeated hosts Oman by 26 runs at Al Amerat Stadium to earn their first two points in the stage, and stay in contention for a place in the main event of the tournament.

The struggle however, still remained with Bangladesh with the opening batters and the approach in the powerplay.

Opener Mohammad Naim and Shakib al Hasan pulled Bangladesh out of trouble as the visitors posted a competitive score in the must win affair.
With Naim’s third half-century in the format and an innings building 42 by Shakib, Bangladesh propelled to 153 all-out, despite some cheap dismissals down the order.

Bangladesh batted first after winning the toss with one change, Naim coming in to replace opener Soumya Sarkar, but the trouble with the openers and powerplay remained.
Liton Das, who got dropped on four, could not justify the opportunity and walked back to the dressing room scoring six.

Oman pacer Bilal Khan appealed for a pad first after getting swing from a full length delivery.

Turned down by the umpire, Oman called for a review, which revealed that the ball had hit pad first and would have gone on to disturb the middle stump.

Floater Mahedi Hasan was sent to bat at No 3 but the move backfired as the right-handed batsman perished to right-arm pacer Fayyaz Butt, who changed direction in follow-through and dived to complete the catch.

Bangladesh after six overs were on 29 for two.

Naim, joined by Shakib took their time to settle in, milked run with rotation and when opportunity arose, went for boundaries.
With the score 63 for two in 10 overs, the duo pressed on the gas, taking on Oman bowlers Kaleemullah and Aqib Ilyas.

Naim and Shakib added 80 off 53 balls with Shakib the aggressor.

The left-handed batsman struck six boundaries and added a blistering 29-ball 42 before getting dismissed from a run-out in the 14th over; Bangladesh on 101 for three.

Mushfiqur Rahim was expected to come to the middle next but Bangladesh on the day had a rare strategy.

Both Mushfiq and Mahmudullah were pushed down the line-up with Nurul Hasan and Afif Hossain coming ahead.
The changes however, did not fetch enough output as both Nurul [three] and Afif [one] walked back to the dressing room after getting caught on the ropes.
Mahmudullah came in at No 7 and added a 10-ball 17 involving a four and a six.

Mushfiq had come out at No 8 or below for the first time since 2016 and failed to make an impact scoring six before getting caught behind.

Bangladesh in the last five overs added 41 to the tally losing six wickets.

Defending the total, there were times when Oman portrayed them to be fearless against a Test playing nation.

In the powerplay the home team flashed 47 runs for the loss of two wickets and by the 10th, scored 70 without further loss of wickets.
In the 12th over, Mahedi struck with a diving catch from Mustafizur Rahman at the boundary, removing Oman captain Zeeshan Maqsood for 12, and triggering the shift of momentum towards Bangladesh.

The ball from the top edge swirled to Mustafizur’s right as he moved with it and ended up having to dive, and catching it despite the fall.

By the end of the 18th over, Oman were down to 112 for nine with Mustafizur and Shakib running havoc.

Along with the win in the game, Bangladesh will possibly have to count on the tussle of the net run rate.