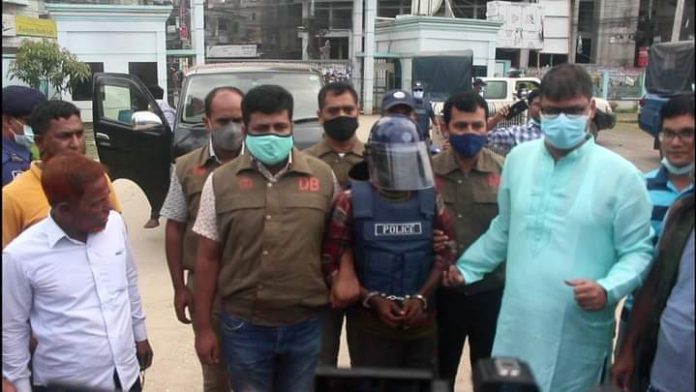 Iqbal, the man believed to be responsible for placing a copy of the Holy Quran at a Durga puja mandap in Comilla, has reportedly confessed to his crimes.

A high ranking police official, who wished to remain unnamed, confirmed the matter to Dhaka Tribune on Friday evening.

Iqbal was taken to Comilla Police Lines on Friday morning following his arrest in Cox’s Bazar the previous day.

Since then, police have been interrogating him to verify his involvement in the incident and uncover other possible leads.
The police official said Iqbal confessed to placing the Quran on the lap of the Hanuman, a central character in the Epic of Ramayana before stealing the club from the idol’s hand.

However, Iqbal is yet to disclose if he acted alone or if he had an aide, the official added.

On Thursday, Cox’s Bazar police arrested Iqbal while he was wandering around in the Sugandha Beach area around 10pm.
Speaking to the media, Comilla Additional SP M Tanvir Islam said further details would be provided to the media after police are done quizzing Iqbal.

Comilla police said on Wednesday Iqbal was identified from video footage of security cameras installed around the Durga Puja pavilion in the city’s Nanuardighi neighbourhood. The temporary puja venue did not have a CCTV camera, but footage from a security camera at a nearby house was analyzed, said, investigators.

In the footage, a man is seen taking the Quran from a local mosque and walking to the puja pavilion. He was later seen walking away with a club.
On October 13, a 999 call to police reported that a copy of the Quran was found on an idol of a puja venue in Comilla.

Locals said they found a copy of the Quran on the lap of Hanuman, a central character in the Hindu epic Ramayana, but his weapon, a club, was missing.

Several temples and puja venues in the city came under attack in the afternoon as tension mounted after the video went viral. Many shared the video calling for attacks on Hindu sites on allegations of sacrilege.

The violence later spread across Bangladesh, leaving seven dead and many Hindu houses and businesses vandalized.