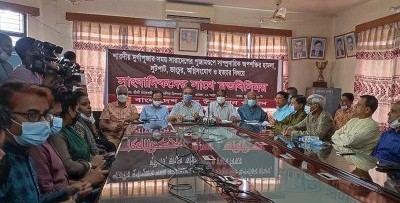 The Bangladesh Puja Udjapan Parishad has called for a boycott of the diwali festivities during the Kali Puja on November 4 to protest against the recent attacks on Hindu temples, Puja venues and houses across the country.

The organization also questioned the sincerity of the local administrations, saying they had failed to act on the nationwide attacks on Hindus that were sparked by false allegations of the Holy Quran being desecrated in Comilla.

During a press conference on Friday, BPUP General Secretary Nirmal Kumar Chattarjee pointed out that there was only one guard at the temporary Puja venue in Comilla on the night of the incident. The power supply to the mandapa area was cut off for a period between 3am and 4am that night.
The question of what caused the power outage remains unresolved. Is the incident being investigated?” he asked.

Nirmal Kumar also said the blame-game between political rivals and a culture of impunity perpetuates violence against Hindu community in this country.

“I do not know if any perpetrators of communal violence have faced penalty in the history of Bangladesh,” Chattarjee said
He added that they would hold the Puja rituals but would refrain from celebrating Dipaboli (popularly known as Diwali) festivities.

The organization reiterated their eight-point demands at the press conference, including calls for compensating victims, restoring the 1972 constitution, trying perpetrators of communal violence in special tribunals, and investigating the 2001 post-election violence perpetrated against minority communities.

Communal tensions have gripped Bangladesh over the past few days, following allegations of the Quran being desecrated at a Durga Puja pavilion in Comilla on October 13, triggering violence in several districts across the country.
Security was ramped up at houses of worship, and Border Guard Bangladesh troops were dispatched to more than two dozen districts. The 10-day Durga Puja festival ended on October 15 with the immersion of Durga idols.

Nationwide hunger strikes and demonstrations are set to be held on Saturday to protest the communal violence.

At least seven people were killed in violence over the incident in different parts of the country, with over 500 arrested in dozens of cases till Wednesday.