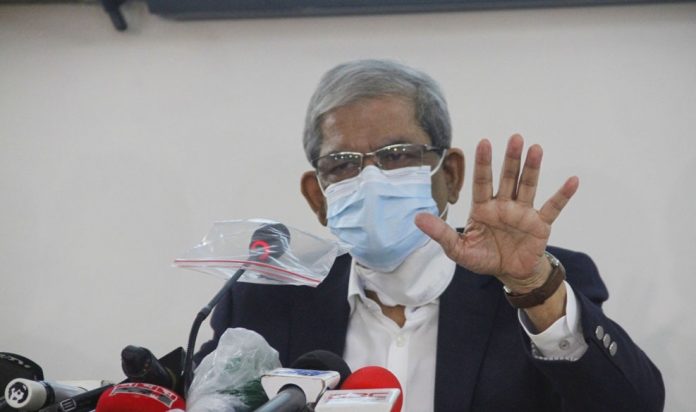 Stating that a plot is there to turn Bangladesh into a “communal state”, BNP Secretary General Mirza Fakhrul Islam Alamgir on Saturday alleged that an “invisible” force is now controlling everything.

“We are always under surveillance… the power of an invisible force that now actually runs the country is so deep-rooted that they’re now controlling the country and its people and our society,” he said.

Speaking at a discussion, the BNP leader said their party has been fighting for democracy amid an adverse situation in the country.
He called upon all the opposition political parties to get united putting aside misunderstanding and divisions among them to restore democracy and people’s rights through a united movement.

“We [BNP] are on a movement. We expect you to come together in this fight on one issue – the restoration of democracy. Let’s fight together to free the country from the current terrible situation. We will overthrow this fascist government and establish a democratic one,” Fakhrul added.

Earlier speaking at a human-chain program, Fakhrul criticized the government for its failure to control the unbridled price hike of daily essentials.
They had promised to provide people with rice at Tk10 per kg, but now its price is Tk70. The prices of soyabean oil, sugar, salt, vegetables and pulses have also gone up,” he observed.

The BNP leader said the government is least bothered about public sufferings caused by the price hike as ruling party men are busy making their own fortunes. “They’re indulging in corruption and siphoning off money abroad and making second homes there.”

He demanded the government take effective steps to control the market and reduce the prices of essentials.

Dhaka south city unit BNP arranged the program in front of the Press Club, protesting the rise in the prices of the essentials.
Fakhrul alleged that the government has snatched people’s basic rights by destroying democracy.

He said people have now started turning around as they want to get back their rights, including the right to vote. “We want to see the release of Khaleda Zia and the withdrawal of 3.5 million cases filed against our leaders and activists.”

The BNP leader said people joined the Liberation War in 1971 with a goal to establish an independent and democratic Bangladesh. “But this government has destroyed the country and its achievements in a very well-planned way. They [Awami League] want to restore a one-party system of government.”

He urged the government to stop oppressing people and hand over power to a non-partisan and neutral government paving the way for holding a credible election.