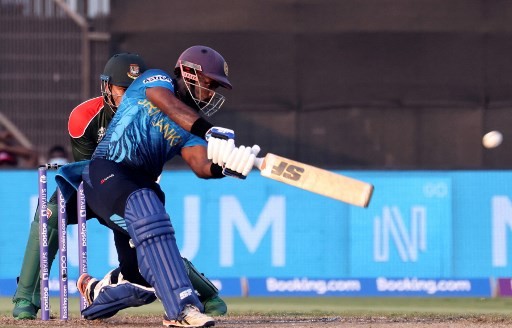 Sri Lanka got off to a winning start in the Super 12 stage of the T20 World Cup as they beat Bangladesh by five wickets in their Group 1 clash at Sharjah Sunday.

Player of the match Charith Asalanka (80 not out) and Bhanuka Rajapaksa (53) starred for the Lankans with a match-winning 86-run fifth wicket stand as the island nation reached their destination with seven balls to spare.

Earlier, riding on half centuries from Mohammad Naim and Mushfiqur Rahim, Bangladesh posted 171 runs for the loss of four wickets in 20 overs.
The Tigers got off to a solid start as Naim and Liton Das (16) put on 40, Bangladesh’s best opening wicket partnership in the T20 World Cup so far after disappointing stands of eight, 11 and nought in the previous three games of the first round.

After Liton’s dismissal, Shakib al Hasan (10) too went back to the pavilion following which Naim and Mushfiq added 73 for the third wicket.

Naim struck 62 off 52 balls, featuring half a dozen fours, and this was his second fifty of the T20 World Cup 2021 after his 64 against hosts Oman.

Despite Naim and Afif Hossain’s (seven) departure, the Tigers went on to register a competitive total with captain Mahmudullah unbeaten at the end on 10 off five balls, alongside Mushfiq, who was not out on a 37-ball 57, including five fours and a couple of sixes.
Mushfiq has not had the best of times lately but against one of his most favorite opponents, the diminutive cricketer registered a masterful display of batting to guide Bangladesh to 171.
Sri Lanka captain Dasun Shanaka earlier won the toss and asked Bangladesh to bat first.

The Tigers made one change to the side with left-arm spinner Nasum Ahmed replacing right-arm pacer Taskin Ahmed.

“We would have liked to bat first,” said Mahmudullah at the toss.

“We need to adapt to the conditions. Hopefully, it’s a good one to bat on. A bit of a relief after that first loss (against Scotland). The boys are relaxed. We have got one change: Taskin is not playing, Nasum comes in.”