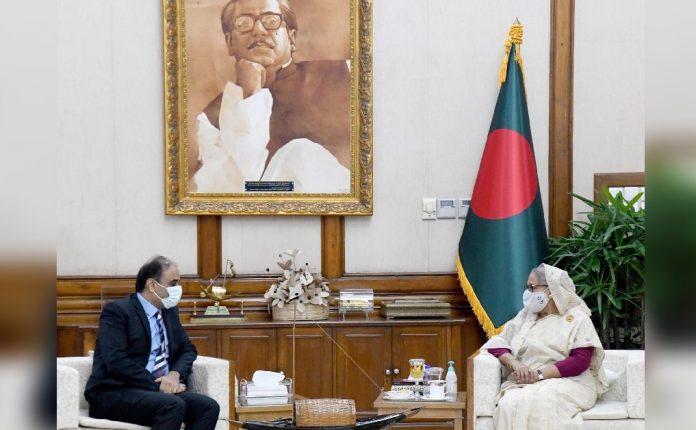 Pakistan is keen to promote relations with Bangladesh, says the country’s envoy

Prime Minister Sheikh Hasina on Monday said South Asian nations should work to eliminate the curse of hunger, poverty, and illiteracy for the well-being of the people in the region.

She said this while newly-appointed Pakistan High Commissioner to Bangladesh Imran Ahmed Siddiqui paid a courtesy call on her at her official Ganabhaban residence in Dhaka.

After the meeting, Prime Minister’s Press Secretary Ihsanul Karim briefed the newsmen.
The prime minister said the cardinal principle of Bangladesh’s foreign policy, enunciated by Father of the Nation Bangabandhu Sheikh Mujibur Rahman is “Friendship to all, malice to none”.

The High Commissioner presented a photo album of late Prime Minister Sheikh Mujibur Rahman’s visit to Pakistan in 1974 to attend the OIC Summit; videos of his engagements in Pakistan during the summit; a photograph of Sheikh Mujibur Rahman’s portrait in Lahore Museum, as well as a Bangla version of a coffee table book “Alla’ma bil Qalam” containing calligraph-art rendered by Pakistani artists.
Sheikh Hasina thanked the Pakistan high commissioner for handing over the historic souvenir related to the memories of Bangabandhu.

The prime minister also appreciated the publication of a calligraphy book in Bangla by Pakistan on the occasion of the Golden Jubilee of Bangladesh’s independence.