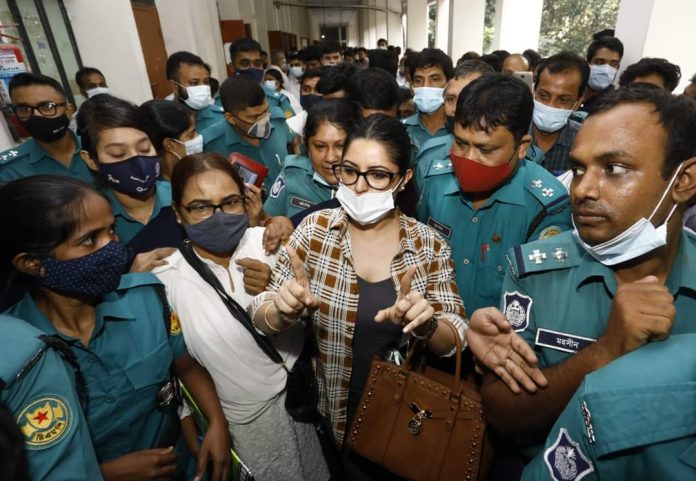 The actor appeared in court and moved bail petition

A Dhaka court has set November 15 for hearing on acceptance of charges against Actor Shamsunnahar Smriti, popularly known by her screen name Pori Moni, after accepting her petition for bail.

The actor and two of her associates face drug charges in a case filed with the Banani police station in Dhaka.

On Tuesday, the actor appeared before the court of Dhaka metropolitan sessions judge and moved a plea for fresh bail in the case.

“She was granted permanent bail earlier. But since the court has changed, we have filed a new bail petition in line with the regulations,” said Pori Moni’s counsel Nilanjona Rifat Surovi.
The court granted bail to the actor and her two associates— Ashraful Islam Dipu and Kabir Hossain, before setting November 15 for a hearing on acceptance of charges against them.

Pori Moni was arrested on August 4 after the Rapid Action Battalion conducted a raid at her home in Dhaka’s Banani. The following day she was accused in a narcotics case filed at Banani Police Station.

The Criminal Investigation Department (CID) received three rounds of remand, totalling seven days, to interrogate Pori Moni over the case. After the remand terms expired on August 21, she was ordered to Kashimpur Central Women’s Prison by the court.
She finally received bail on August 31 and was released from the prison the next day, after nearly a month in detention.

The raid on her home came months after she accused a businessman of trying to rape and murder her at the Dhaka Boat Club.

The High Court questioned the necessity of her three rounds of remand in police custody, concluding that remand orders one after another amounted to an “abuse of power”.