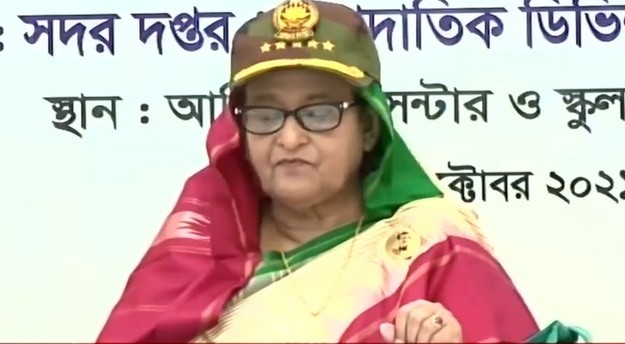 Bangladesh Army brought honour and dignity for Bangladesh by demonstrating their outstanding dedication says, the premier

Prime Minister Sheikh Hasina on Wednesday asked the members of the Bangladesh Army to always remain ready to make the highest sacrifice to protect the interests of the nation.

“I believe the Bangladesh Army will remain ever ready for the highest sacrifice in any national need alongside protecting the country’s sovereignty,” she said.

The prime minister was addressing a function of the Bangladesh Army virtually from her official residence Ganabhaban.

The function was arranged to give the national standard (national flag) to 10 units and hand over the new flag to Mujib Regiment and Rowshan Ara Regiment of the Bangladesh Army at the Artillery Centre and School at Halishahar Cantonment in Chittagong.
Hasina said the Bangladesh Army has been playing a significant role in building the nation with their works in facing natural and manmade disasters as well as socio-economic and infrastructural development alongside protecting the country’s sovereignty.

She mentioned their important role in the development of the country’s communication system and facing the Covid-19 pandemic.

PM Hasina said the members of Bangladesh Army brought honour and dignity for Bangladesh by demonstrating their outstanding dedication, dutifulness and professionalism in the establishment of global peace and different foreign missions, which undoubtedly have brightened the image of the country.
On behalf of the prime minister, Chief of Army Staff General SM Shafiuddin Ahmed handed over the national standards to the respective commanders of 4, 12 and 20 field regiments artillery, 5 Air Defence Artillery, Riverine Engineering Battalion, 1 and 2 Signal Battalions, Army Aviation group and NCO Academy as well as reintroduced the flag to the commanders of the Mujib Regiment and Rowshan Ara Regiment Artillery.