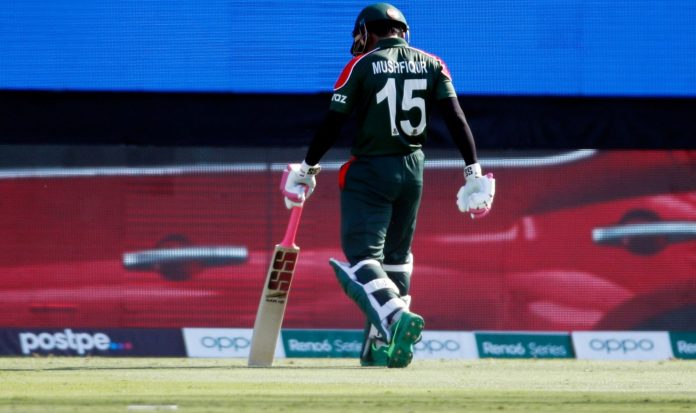 After another big defeat, the big mouthed Tigers failed to raise their voice or offer excuses

Bangladesh team’s press conference following the eight-wicket defeat to England in the Super 12 stage of the T20 World Cup at Sheikh Zayed Stadium in Abu Dhabi was dull.

Recently, the pressers were spicy and loud despite poor performances from Bangladesh, but after another big defeat, the big mouthed Tigers failed to raise their voice or offer excuses.

The traditional and social media have been hurling harsh criticisms to the under-performing team but each time, the senior members arrived with big words and counterattacks to their critics during the tournament.
But on Wednesday, Bangladesh team at last became as meek off the field as their horrific performance on the field.

They sent one of the newbies of the dressing room, spinner Nasum Ahmed, to deal with the press conference.

It was perhaps befitting as Nasum, the tail-ender showed intent with the bat unlike the senior batsmen, who have been playing in the arena for years.

The young man is yet to learn how to offer loud yet empty excuses like his seniors do after every poor performance.
Nasum in his media appearance following the defeat against England was humble with his tone.

The questions revolved around Bangladesh’s present condition in perspective of the tournament and in almost all his answers, Nasum mentioned that the team are trying but proving to be unsuccessful.

“We are actually trying brother. The same question is being repeated and I am giving out the same answer. We are trying,” said Nasum in a compromising tone in Abu Dhabi Wednesday.

Bangladesh team has been hitting one low after another on the field since their arrival in the Middle East for the world event.

They had started with a shocking defeat to Scotland in the qualifying round, and in the main event they have lost both games so far.
However, the Tigers seemed to restore all their energies for big talks as they defended themselves vehemently in the press conferences and rather counter attacked verbally to any sort of criticism or question.

The saga had started with star all-rounder Shakib al Hasan going hard on the reporters following their win against Oman in the qualifiers.
This was followed by strong words from Bangladesh T20 captain Mahmudullah, indicated to Bangladesh Cricket Board president Nazmul Hasan and Co following their final qualifying game, against Papua New Guinea in Muscat.

Following the unacceptable five-wicket defeat against Sri Lanka in their first game in the Super 12s at Sharjah earlier this week, it was another senior player Mushfiqur Rahim who took the turn to take on the critics.

The right-handed batsman had told the critics to “look on the mirror” and like Shakib and Mahmudullah, claimed how much they are doing for the country and people who do not do that have no right to criticize them.
And lastly on Tuesday, Bangladesh bowling coach Ottis Gibson had stoked the fire with blazing words, stating that former Bangladesh captain Mashrafe bin Mortaza’s statement against the coaching staff do not bother him as he is not of the circle anymore.

However, in the era of internet, where every action is analyzed and criticized by people, this sort of arrogance faced even more serious trolls.

The loudmouth Tigers incited the trolls even more when they surrendered once again with yet another dismal show.

It is understood that the Bangladesh team members were making an effort to protect the cricketers from negative and illogical critics but a majority of the fraternity considers the way to be incorrect.
The team’s approach of answering verbally rather than replying with performance dug even deeper hole and distrust and created disgust among followers who hail and inspire them throughout the year.

Losing their second game, against England, Bangladesh now need to win the three remaining in order to qualify for the semi-finals.

However, considering the team’s current confidence level and the opponents who Bangladesh are to play against – hopes are not very high at this point.

Bangladesh in the three remaining games will be playing against the West Indies Friday, followed by matches against South Africa and Australia on Tuesday and Thursday respectively.

Nasum keeping to his duty delivered a positive reply when asked about Bangladesh’s chances in the remainder of the tournament.
We still have three games. Winning the first [against West Indies] may boost us to win the next two as well. It will surely give us confidence. We were highly confident when we played at home [against Australia and New Zealand]. We started with a defeat in Oman but bounced in the next two games and qualified for the Super 12s. We always try to do well in the field, it is our bad luck that we are failing,” a hapless looking Nasum explained.