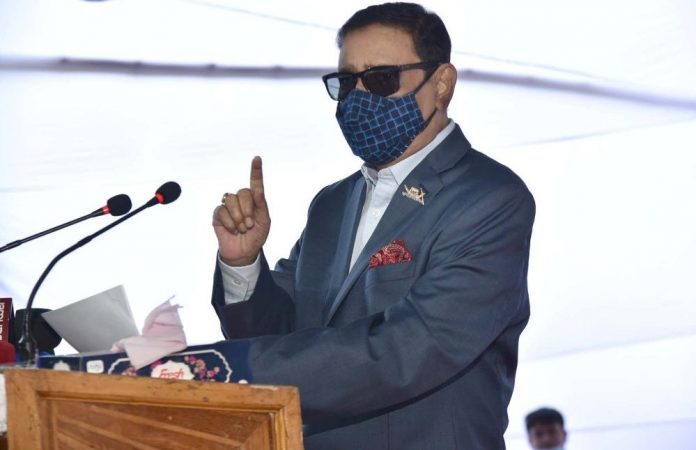 The next general election will be held under the Election Commission, not under the Awami League government, the ruling party general secretary says

Awami League General Secretary Obaidul Quader on Thursday warned that the ruling party would handle the BNP with an iron hand if they resort to any form of terrorism and create public sufferings in the name of movement.

He made the remark while speaking at a press conference on contemporary issues at his official residence in Dhaka.

Quader, also the road transport and bridges minister, said holding meetings and rallies is a constitutional right of citizens.
He said if the BNP does not get approval for holding rallies, the party would allege that the government does not believe in democracy.

“And, once the government gives the BNP clearance to hold a rally, it ruins public properties. The BNP’s program means creating panic among people,” he added.

The Awami League general secretary said by carrying out attacks on police at the capital’s Naya Paltan on Tuesday, the BNP proved that it is unable to hold a peaceful political program.

It is necessary to examine whether BNP had any agenda behind its so-called harmony rally held on Tuesday, he said.

In fact, Quader said, the BNP’s politics mean attack, clashes, conspiracy, and terrorism, and the party cannot come out of this circle.
Noting that the government wants a competitive election, he said the Awami League does not make scores on the empty field but the BNP has been practicing this since its birth.

“The country’s people are yet to forget the February 15 election held in an empty field,” the AL general secretary said. He said the BNP leaders are making various statements to conceal their failures and evade the criticism of their supporters.

The next general election will be held under the Election Commission, not under the Awami League government, he said.

He said legal action is being taken against those involved in the attacks by identifying them through examination of video footage.

Quader said the BNP was trying to make the situation volatile by destroying communal harmony but the government handled the situation with an iron hand.

The BNP is creating division among the people, he said, adding that the party is now getting agitated as Prime Minister Sheikh Hasina has made the nation united to advance the country towards prosperity.

About the local government elections, Quader said the polls will be held in phases. He said he instructed the local Awami League organizing units to take preparations to this end.