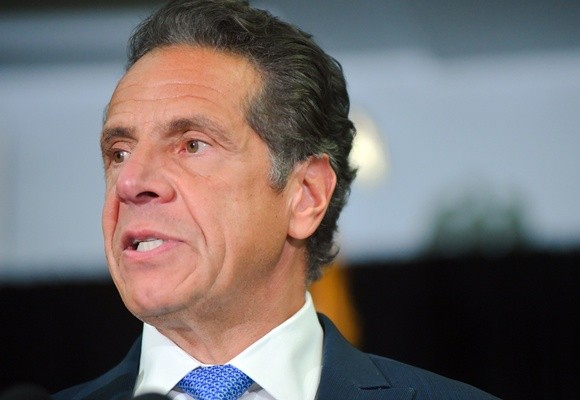 Former Gov Andrew Cuomo was charged Thursday with groping a female aide’s breast inside the Executive Mansion “for the purposes of degrading and gratifying his sexual desires,” according to a criminal complaint filed in Albany City Court.
The complaint was based on the account of one of the dozen or so women whose accusations of sexual harassment against Cuomo formed the basis of a state attorney general’s report that eventually led to his resignation in August.

For Cuomo, the misdemeanour complaint was a serious and potentially devastating development, as he continues to fight the allegations and attempts to discredit the report. It also served as a stunning chapter in the political demise of a man who dominated state politics for a decade, seemed on a glide path to a fourth term and, less than a year ago, was hailed as a national hero of the coronavirus pandemic.

Now Cuomo, who has spent time living on Long Island since his resignation, will be required to appear in court in Albany on Nov 17 to be arraigned on a charge of forcible touching.

The criminal complaint centres on an alleged interaction between Cuomo and a female aide Dec 7, 2020, in the governor’s residence in Albany. The aide, Brittany Commisso, had previously accused Cuomo of groping her breast while they were alone in the mansion late last year.

The charge against Cuomo caught many in the state capital by surprise, including David Soares, the district attorney in Albany County, who said in a statement that, “like the rest of the public, we were surprised to learn” about the complaint filed by the county’s sheriff, Craig Apple. In such investigations, prosecutors and local police departments typically work as partners in initiating the criminal process.

In a statement, Cuomo’s personal lawyer, Rita Glavin, said the governor had “never assaulted anyone” and described Apple’s motives as “patently improper.” She criticised Apple for not communicating with the district attorney and accused him of effectively pronouncing the governor guilty at a news conference earlier this year before an investigation by his office had concluded.

“This is not professional law enforcement,” she said. “This is politics.”

Apple’s office did not respond to several requests for comment Thursday, and news of the criminal complaint was public for several hours before the sheriff released a statement confirming that a criminal summons had been issued. The complaint, which was first reported by New York Focus, was made public not by the sheriff’s office, but by the Albany City Court, where it was filed, initially leading to a flurry of confusion over its origin.

Forcible touching is a misdemeanour that carries a penalty of up to one year in jail; it is not an unusual charge, and it can be brought in cases in which prosecutors are unable to prove that touching was done for sexual purposes.

To prove it, prosecutors must show that the defendant acted either to degrade or abuse his victim, or for his own sexual gratification. Prosecutors would have to prove several elements of the crime, including that Cuomo’s touching of Commisso was not accidental, but carried out intentionally and with force.
The evidence against Cuomo, the complaint said, includes a text message from his cellphone, state police BlackBerry PIN messages, state police aviation records for Dec 7 and swipe-card entry records from the state Capitol.

Cuomo would not be added to the sex offender registry even if convicted of the misdemeanor. The charge of forcible touching would require the victim to be younger than 18 for an offender to be listed on the registry, and Commisso was an adult when the incident occurred.

Cuomo and Glavin have repeatedly denied that he inappropriately touched Commisso, who worked as an executive assistant, and have repeatedly cast doubt on her allegations.

Commisso filed a complaint against Cuomo with the Albany County Sheriff’s Office in August. A subsequent investigation led to the criminal charge, with the misdemeanour complaint signed by an investigator from the sheriff’s office, Amy Kowalski.

The criminal complaint said Cuomo did “intentionally, and for no legitimate purpose, forcibly place his hand under the blouse shirt of the victim and onto her intimate body part.”

Commisso did not respond to a call or a text, and a lawyer representing her could not immediately be reached for comment.

The misdemeanour charge was the latest twist in the ignominious downfall of Cuomo, a Democrat and son of a former governor, who once ruled the state with an iron fist and was reelected twice. His fortunes turned earlier this year, as women began accusing him of sexual harassment and his administration was buffeted by a series of scandals, including controversies over his handling of data on nursing home deaths during the pandemic.

He resigned two weeks after the Aug. 3 release of the state attorney general’s report, which found that Cuomo had sexually harassed numerous women, including current and former government employees, and fostered a hostile work environment.

The report — the outcome of an investigation conducted by outside lawyers hired by the state attorney general, Letitia James — concluded that Cuomo had engaged in unlawful behaviour ranging from inappropriate comments to unwanted touching. The report’s findings led the Albany County district attorney, along with four other local prosecutors, to open separate investigations into the governor’s conduct.

Cuomo, as well as his aides, repeatedly attacked the 165-page report as politically motivated and driven by James’ interest in running for governor, even though Cuomo originally authorized and supported the investigation.

James, who is preparing to declare her candidacy for governor as soon as this week, issued a statement Thursday saying that her office’s investigation had “proceeded without fear or favour.”

“The criminal charge brought today against Mr. Cuomo for forcible touching further validates the findings in our report,” James said.
Later Thursday, Richard Azzopardi, a spokesperson for Cuomo, said that the manner in which the sheriff’s office filed the complaint “doesn’t pass the laugh test, and this process reeks of Albany politics and perhaps worse.”

“The fact that the attorney general — as predicted — is about to announce a run for governor is lost on no one,” Azzopardi said. “The truth about what happened with this cowboy sheriff will come out.”

Commisso’s allegations, which included instances in which she said Cuomo grabbed her buttocks and kissed her repeatedly, were among the most serious levelled against the former governor.

The attorney general’s report said that Commisso was once directed to assist Cuomo in his residence last year, when, Commisso said, he pulled her into a close hug. She said she stepped away and told Cuomo, “You’re going to get us into trouble.” Commisso told investigators that Cuomo responded by saying, “I don’t care.” He then proceeded to slip his hand under her shirt and grabbed her breast.

Glavin, in media appearances and lengthy written submissions, has detailed what she deems as inconsistencies and discrepancies that, she has argued, undermine Commisso’s allegations.

She has described Commisso’s allegations as an “evolving version of events” and has said the attorney general’s report left out testimony from Cuomo about the only private interaction he recalled having with her. She has also suggested that Commisso had a financial incentive to pursue charges against the governor because she was in the process of getting a divorce.

“The only interaction that the governor recalls having with Ms. Commisso bears no resemblance to her allegation,” Glavin wrote in a report she released earlier this month.

Cuomo told investigators that Commisso was the “initiator” of any hugs between them and that he went along with the hugs because he did not “want to make anyone feel awkward about anything.”

Commisso responded by telling “CBS This Morning” in August that she thought Cuomo was lying, adding that, “I would never on my own get up and initiate a hug with the governor.”

“What he did to me was a crime,” Commisso said in the interview. “He broke the law.”

She added, “The governor needs to be held accountable.”