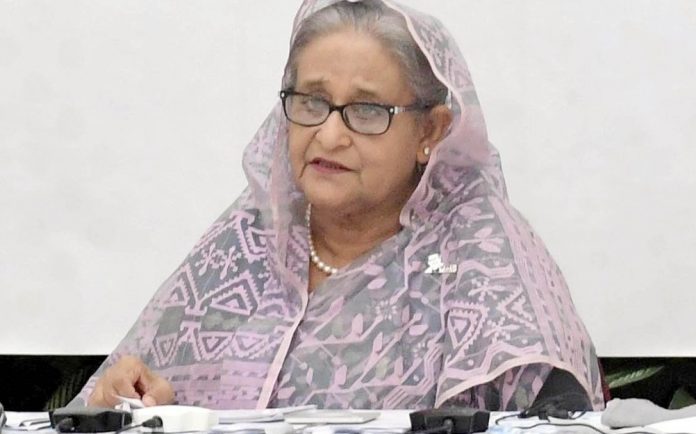 She is scheduled to be back in Bangladesh on November 14

Prime Minister Sheikh Hasina will leave Dhaka on Sunday for the United Kingdom and France on a two-week visit.

During the visit, she will attend the 26th UN Climate Change Conference of the Parties (COP26), Bangladesh Investment Summit and hand over “Unesco-Bangladesh Bangabandhu Sheikh Mujibur Rahman International Prize for the Creative Economy”.

The prime minister will also hold bilateral meetings with British Prime Minister Boris Johnson and French President Emmanuel Macron apart from other heads of state and government during her visit.

The prime minister will also hold a meeting with the UK’s Prince Charles.
A VVIP flight of Biman Bangladesh Airlines, carrying Sheikh Hasina and her entourage, will depart Hazrat Shahjalal International Airport at 9pm.

It will land at Glasgow International Airport in Scotland at 2:45pm (local time) where Bangladeshi High Commissioner to the UK Saida Muna Tasneem will welcome her.

Hasina will address the key segment of the COP26 on November 1 apart from joining the opening ceremony.

Hasina will also attend a meeting titled “Action and Solidarity-the critical decade” at the invitation of her British counterpart Boris Johnson on November 1.
She will have a meeting with Commonwealth Secretary General Patricia Scotland, Sri Lankan President Gotabaya Rajapaksa and Bill Gates, the founder of Bill and Melinda Gates Foundation.

She will also attend a civic reception virtually arranged by the Bangladeshi community living in Scotland.

She will have meetings with the First Minister of Scotland Nicola Sturgeon, Australian Prime Minister Scott Morrison and speaker of Scottish Parliament Alison Johnstone.

Saida Muna Tasneem will welcome her at the airport.

On the same day, she will go to Westminster where Rushanara Ali MP and Lord Gadhia will welcome her. She will have a courtesy call with British Speaker Sir Lindsay Hoyle.

She will also unveil the cover of two publications titled “Secret Documents” (Vol i-ix) and “Mujib & Introduction” and inaugurate an art exhibition titled “Bangabandhu and Britain: A Centenary Collection”.
On November 7, she will inaugurate the newly-expanded portion of Bangladesh High Commission and Bangabandhu Lounge there.

She will also attend a civic reception to be accorded to her by Bangladeshi expatriates living in the UK.

On November 9, she will leave London for Paris at 8am (local time) by a VVIP flight of Biman. It will land at De Gaulle International Airport at 11:15am (local time).

Bangladesh ambassador Khandaker Mohammad Talha will welcome her at the airport

She will have a meeting with a delegation of the French business organization MEDEF. French Minister Florence Parly will also meet her.

Later in the afternoon, she will visit the French Senate where she will receive official reception during the ongoing Senate Session.

On November 11, Sheikh Hasina will attend the Paris Peace Forum.
Later, she will go to attend the “Unesco-Bangladesh Bangabandhu Sheikh Mujibur Rahman International Prize for the Creative Economy” awarding ceremony at the Unesco Headquarters.

From there she will go to Elysee Palace to attend the dinner to be hosted by French President Emmanuel Macron in honour of her.

On November 12, Sheikh Hasina will go to the Paris Peace Forum and attend a high-level panel discussion on South-South and Triangular Cooperation.

Later, she will go to the Unesco Headquarters to attend the inaugural session of the 75th Founding anniversary of Unesco where she will deliver her speech.

She will participate in the dinner to be hosted by Unesco Director General Audrey Azoulay in honour of heads of government and state.
On November 13, Sheikh Hasina will attend a civic reception to be accorded to her by the expatriate Bangladeshis living there.

In the afternoon, she will depart De Gaulle International Airport by a VVIP flight from Biman and land at Hazrat Shahjalal Airport at 10am (local time) on November 14.