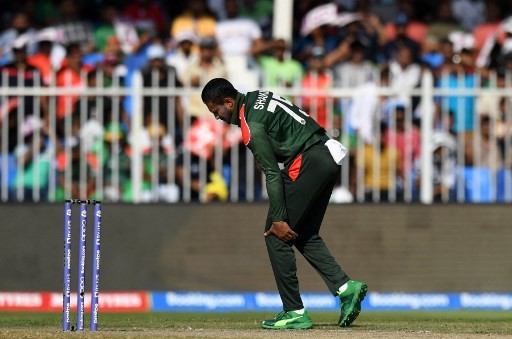 A decision is pending whether the duo will be available for the next game, against SA on Tuesday

Bangladesh all-rounder Shakib al Hasan and wicketkeeper-batsman Nurul Hasan are resting and under observation due to respective injuries.

A decision is pending whether the duo will be available for Bangladesh’s next game, against South Africa Tuesday, in the Super 12s of the ongoing T20 World Cup.

Shakib in the last outing, against the West Indies Friday, was seen struggling with a hamstring injury throughout the game.

Bangladesh Cricket Board chief physician Dr Debashish Chowdhury, who is with the team in the UAE, informed that they will observe Shakib’s progress in the next couple of days.
There are some issues with Shakib’s hamstring as he struggled during the game against the West Indies. We still have a couple of days’ time before the next game Tuesday so we are not willing to rush on it. Let’s see how he progresses in the next couple of days followed by the rest and we will observe him again after that,” Dr Debashish told media in Dubai Saturday.
On the other hand, Nurul had picked up an injury on his right testis while batting at the nets facing right-arm Taskin Ahmed, the night before the game against England last Tuesday.

Despite the discomfort Nurul was available for the game against England but was rested against the West Indies after reports showed he had fractured his right testis.

“Sohan (Nurul) is prescribed for a complete three days of rest and we will assess his condition Monday. After the assessment, if we feel that he is able to play the next game we will decide accordingly but until then we can’t say anything further,” said the BCB chief physician.
Actually Sohan thought that he could manage the injury but after playing the game the pain increased. But the thing is players take such calculative risks in sports. So the thing is he tried to play for the country but since his pain increased after playing we decided to rest him for the West Indies game,” he added.
Dhakatribune