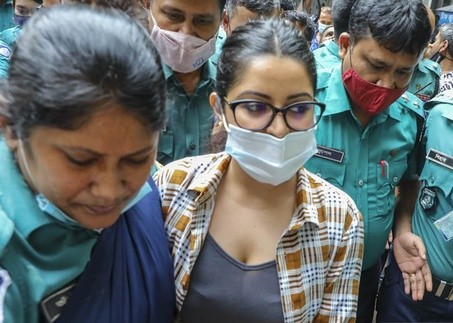 Two Dhaka metropolitan magistrates have unconditionally apologised to the High Court for their decisions on the remand of actress Pori Moni in a drugs case, instead of providing explanations.
The panel of Justice Mustafa Zaman Islam and Justice KM Zahid Sarwar set Nov 25 for its order on the matter after lawyer Abdul Alim Mia Jewel presented an apology on behalf of the magistrates on Sunday.

The court will mention the answers to every question raised in the case, Justice Mustafa said. “Overall, we will issue a guideline.”

The magistrates said in the petition that they will be careful in performing their judicial duty and follow the Supreme Court’s directives on remand.

Senior lawyer ZI Khan Panna said in the hearing that the magistrates “clearly violated” the Supreme Court’s directives. Now in an affidavit, the magistrates acknowledged they did not receive proper training, he said. Attorney General AM Amin Uddin also pointed the finger at a lack of training.

Panna also alleged the law enforcers are abusing the law while taking suspects into custody for interrogation.
Mojibur Rahman, the lawyer for Pori Moni, said magistrates in Bangladesh should shun the practice of what the two magistrates did with the actress’s remand.

The High Court had asked the magistrates to explain what basis they had for granting these remand petitions. It issued a rule on Sept 2 asking the two magistrates to provide an explanation within 10 days. It also summoned the investigation officer to the court with the case docket so he could explain his position on the last two rounds of Pori Moni’s remand.

Accordingly, the investigation officer appeared before the court on Sept 15 with the case docket. The magistrates also presented their written statements to the court on that day.

The High Court said it was unsatisfied by the explanations provided by the two magistrates, stating they had violated the remand guidelines set up by the High Court and the Supreme Court and conventional law on the issue.

The court then ordered the magistrates to explain their decisions again.