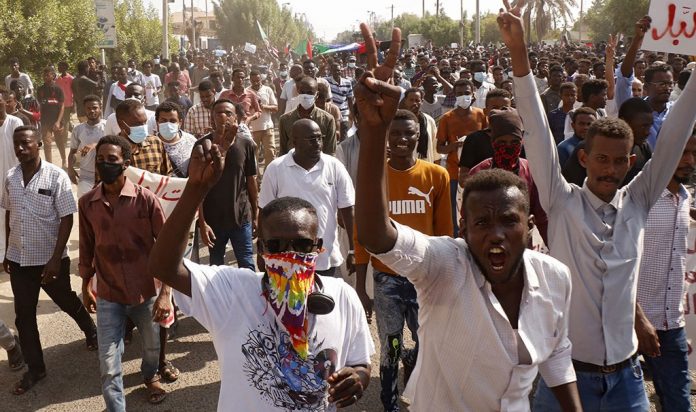 Tens of thousands turned out across the country for Saturday’s demonstrations, marching against the army’s October 25 power grab

Sudanese anti-coup protesters on Sunday manned barricades in Khartoum a day after a deadly crackdown on mass rallies, as a defiant civil disobedience campaign against the military takeover entered its seventh day.

Tens of thousands turned out across the country for Saturday’s demonstrations, marching against the army’s October 25 power grab, when top General Abdel Fattah al-Burhan dissolved the government, declared a state of emergency and detained Sudan’s civilian leadership.

The move sparked a chorus of international condemnation and punitive aid cuts, with world powers demanding a swift return to civilian rule and calls for the military to show “restraint” against protesters.
Volker Perthes, UN Special Representative to Sudan, said Sunday he had met with detained Prime Minister Abdalla Hamdok, who is under armed guard by the ruling military junta.

“He (Hamdok) remains well but under house arrest,” Perthes said. “We discussed options for mediation and the way forward for Sudan. I will continue these efforts with other Sudanese stakeholders.”

At least three people were shot dead and more than 100 people wounded during Saturday’s demonstrations, according to medics, who reported those killed had bullet wounds in their head, chest or stomach. Police forces denied the killings, or using live bullets.

At least a dozen people have been killed since protests began, according to medics treating the wounded, but a senior US official has said they estimate that 20 to 30 people have died.
No, no, to military rule,” protesters carrying Sudanese flags chanted as they marched around the capital and other cities, as forces fired tear gas to break them up.

More than 100 people were also wounded on Saturday, some suffering breathing difficulties from tear gas, the independent Central Committee of Sudan’s Doctors said.

Sudan had been ruled since August 2019 by a joint civilian-military council as part of the now derailed transition to full civilian rule.

Soldiers on the streets

US President Joe Biden has called the coup a “grave setback”, while the African Union has suspended Sudan’s membership for the “unconstitutional” takeover.

The World Bank and the United States froze aid, a move that will hit hard in a country already mired in a dire economic crisis.
But Burhan — who became de facto leader after hardline ex-president Omar al-Bashir was ousted and jailed in 2019 following huge youth-led protests — has insisted the military takeover was “not a coup”.

Instead, Burhan says he wants to “rectify the course of the Sudanese transition”.

Demonstrations on Saturday rocked many cities across Sudan, including in the eastern states of Gedaref and Kassala, as well as in North Kordofan and White Nile, witnesses and AFP correspondents said.

As night fell Saturday, many protests in Khartoum and the capital’s twin city of Omdurman thinned out. But on Sunday morning protesters were back on the streets, again using rocks and tyres to block roads.

Shops remain largely shut in Khartoum, where many government employees are refusing to work as part of a nationwide protest campaign.
Soldiers from the army and the much-feared paramilitary Rapid Support Forces were seen on many streets in Khartoum and Omdurman.

Security forces have set up random checkpoints on the streets, frisking passers-by and randomly searching cars.

Phone lines, which were largely down on Saturday, were back apart from intermittent disruptions. But internet access has been cut off since the army’s takeover.

Sudan has enjoyed only rare democratic interludes since independence in 1956 and spent decades riven by civil war.

Burhan was a general under Bashir’s three decades of iron-fisted rule, and analysts said the coup aimed to maintain the army’s traditional control over the northeast African country.
AFP