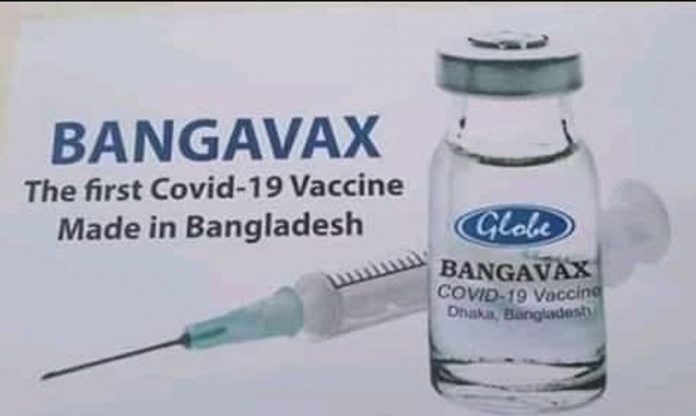 The local pharmaceutical company Globe Biotech Limited has been preparing to begin human trials of Bangavax, a single-dose Covid-19 vaccine, depending on authorisation from the Bangladesh Medical Research Council (BMRC).

The vaccine developers on Monday submitted a report on the results of the trial on monkeys to BMRC as per guidelines.

“We hope to start human trials within November if we get moral permission from the BMRC and the drug administration,” Globe Biotech Senior Manager (Quality and Regulation) Dr Md Mohiuddin told media on Tuesday.

The vaccine was able to successfully prevent Covid-19 infections during the trials conducted on monkeys, Globe Biotech claimed.

In June, the BMRC, which oversees such trials, said certain conditions needed to be met before it would grant permission for trials on humans.

Dr Md Mohiuddin said the vaccine developers had responded to all the inquiries and observations of the BMRC.

“Bangavax is a single dose vaccine and does not have any side effects. We have conducted trials on monkeys and obtained a 95% success rate. The success rate will only vary by about 2%, hopefully, in human trials,” he added.

The vaccine developers completed trials on 56 monkeys over a period of three months.

They are of the view that since there are genetic similarities between monkeys and humans, the trials have already proved that Bangavax is completely safe and 100% effective and will work similarly in the human body.

In February, the company conducted trials on rats.

“This is the first trial on monkeys, which is a new milestone in the country’s scientific research,” Mohiuddin said.

Meanwhile, Prof Md Ruhul Amin, director of BMRC, said: “Globe Biotech has submitted a report on animal trials. Now the Directorate General of Drug Administration (DGDA) will look into the matter. The approval committee will meet within two weeks and will decide on approving the vaccine then.”

In July last year, Globe Biotech announced that it was developing a Covid-19 vaccine.

On December 28, 2020, the DGDA gave permission to the pharmaceutical company to manufacture its Covid-19 vaccine for clinical trials.

The pharmaceutical company approached the DGDA on January 15 this year, seeking permission for clinical trials.

If Bangavax gets a go-ahead from the BMRC, Globe Biotech will conduct human trials through a third-party clinical research organization (CRO).

Dr Mohiuddin said the clinical trial would be a four-phase process.

In Phase I, small groups of 20-100 healthy volunteers would receive the vaccine to assess its safety, confirm it generates an immune response, and determine the right dosage.

In Phase II, the clinical study will be expanded to over 100 volunteers. Among them, a portion will receive the vaccine while others will receive placebos.

The volunteers will be monitored for side effects and to further assess the vaccine’s ability to generate an immune response.

In Phase III, the vaccine will be given to over a thousand people.

In Phase IV, researchers will analyse long-term data on the vaccine’s benefits and side effects.

Dr Mohiuddin has claimed the vaccine will be effective for 11 variants of Covid-19, including the Delta variant.