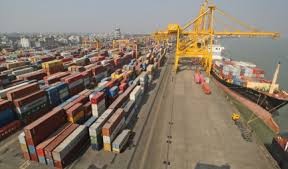 Bangladesh earned $15.74 billion from exports in the first four months of the current fiscal year (July-October), fetching a 22.62% year-on-year growth.

According to the recent data published by the Export Promotion Bureau (EPB), readymade garments (RMG) – the highest export earner – bagged $12.62 billion, which is 20.78% more than the corresponding period of the previous fiscal year.

Meanwhile, the export earnings for only October increased 60.37% to $4.73 billion, the highest ever for a single month in Bangladesh.
The month of October has also seen historic growth in the apparel sector, as high as 53.28%, as export reached $3.56 billion this month.

Mohiuddin Rubel, director of the Bangladesh Garment Manufacturers and Exporters Association (BGMEA), said that the global demand for clothes and retail is rebounding and orders are coming to Bangladesh.

“Although we are exporting more, our cost of production has gone up significantly, leading to a smaller profit margin,” he added.

He further said that the vulnerability of the industry has also increased in recent times.

“Moreover, we need to see how long this surge in exports lasts. So, rather than being complacent, we need to focus more on building the qualitative capacity of the industry and encourage more investments so that we can grow in quality and in termsof value,” Rubel said.

However, the earnings from jute and jute products dropped by 24.11%.