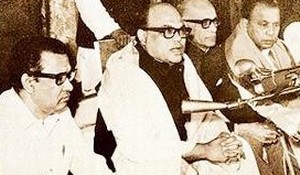 They were murdered while in state custody as the country saw sweeping changes in politics in the chaos that followed Bangabandhu’s assassination.
The day Bangladesh was robbed of its top national leaders has since been remembered as Jail Killing Day.
Due to the coronavirus pandemic, programmes and public gatherings are still on a limited scale, like last year. Awami League headquarters and party offices around the country are flying the national flag and the party flag at half-mast. The Awami League and its affiliated organisations are also wearing black badges of mourning.
Awami League leaders, led by General Secretary Obaidul Quader, went to the Banani graveyard to pay their respects to Syed Nazrul Islam, Tajuddin Ahmad and M Mansur Ali, who are buried at the site, this morning. Tribute was paid at the grave of AHM Quamruzzaman in Rajshahi as well.
After paying his respects in Banani, Obaidul Quader told reporters, “After Bangabandhu, the seeds of communalism were sown in the country by the killing of the national leaders. The challenge now is to eradicate extremist sectarianism. All democratic, patriotic and non-communal forces must unite to eradicate the violent communal evil.”
A museum has now been set up in the old central jail in Dhaka where the four leaders were killed. Home Minister Asaduzzaman Khan Kamal paid homage to the sculptures of Bangabandhu and four other leaders in the morning.
A discussion on Jail Killing Day was also organised at the central office of the Awami League this morning.