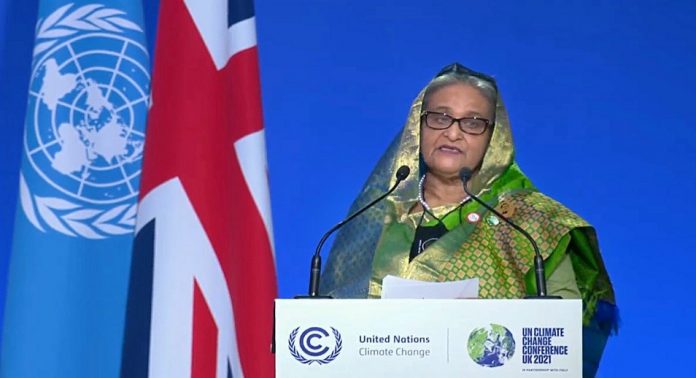 The Bangladesh premier speaks on behalf of the Climate Vulnerable Forum, a grouping of 48 of the countries most threatened by climate change

With Greta Thunberg, Sir David Attenborough and influential world leaders expected to greatly attract the media attention at COP26, the uphill task of making 197 countries commit to changes will fall to negotiators, mostly leaders and diplomats.

Having said so, BBC has named Bangladesh Prime Minister Sheikh Hasina and four such figures, who will have a major influence on the summit’s success or failure.

Talks often go through the night and rarely finish on time, it said, adding that one participant likened the job to playing four-dimensional chess with spaghetti.

Not only do countries have differing national priorities, but to make things even more confusing, nations forge alliances with each other and form negotiating blocs within the talks. Countries can be members of several different groups at the same time.

‘The voice of the vulnerable’

The Bangladesh premier speaks on behalf of the Climate Vulnerable Forum, a grouping of 48 of the countries most threatened by climate change.
She’s an experienced and straight-talking politician, who will bring the lived experience of climate change to the COP. Just last year, about one-quarter of Bangladesh was underwater as floods threatened a million homes.

Despite the fact that they are among the poorest nations, the Climate Vulnerable and the Least Developed Countries group have a strong track record in the negotiations.
These countries “punch above their economic weight, so to speak”, says Dr Allan.

“Because they are a strong moral voice, and because decisions are taken by consensus, they have been able to get a good deal of progressive decisions through the UN machinery.”

According to Quamrul Chowdhury, a Bangladeshi negotiator, who works as part of Sheikh Hasina’s team, the vulnerable nations are coming to Glasgow with a clear set of goals.

“There are over one billion people now on the hook of adverse climate impacts,” he told me. “We want to get them off the hook by getting the richest countries to steeply cut back emissions, to fix the outstanding Paris rules, to ramp up climate finance and to address loss and damage.”