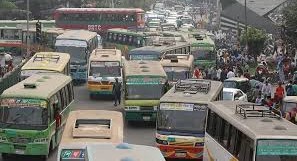 On Wednesday, the government hiked diesel price by Tk15 per litre

Owners and workers of public and cargo transports have announced to go on a nationwide strike from Friday morning protesting the hike in diesel oil price that came into effect Thursday.

However, some central leaders of the owners-workers organizations said while they are yet to declare the strike, their branches in several districts have decided amongst themselves to suspend operation from Friday.
On Wednesday, the government increased diesel and kerosene prices by Tk15 per litre — from Tk65 to Tk80 — in order to keep them in line with the rising fuel prices in the global market.

That led owners and workers of various cargo and public transport organizations around the country to meet on Thursday and decide to go on strike to compel the government to reverse its decision, sources said.

Talking to a leading English daily, Majumder said: “We are already under a lot of pressure. But now it will be impossible to operate vehicles because of the increased diesel price. This move is not logical.”

He claimed that the government did not discuss the issue with the transport leaders before making it official.
Both Majumder and Rustam told reporters that the strike will continue until the government changes its decision.

Meanwhile, Khandaker Enayet Ullah, the secretary general of Bangladesh Road Transport Owners’ Association, told Dhaka Tribune: “We did not declare any shutdown centrally but some district leaders called the strike because they are unable to operate at current fares while paying the hiked fuel prices.”

The association’s President Moshiur Rahman Ranga also made similar remarks while talking to another daily.

Enayet said: “We have already sent a letter to the authorities, sharing our concern and seeking a solution.”

Experts have said many have lost their livelihoods amid the Covid-19 pandemic, and increasing fuel prices before their financial recovery will only cause more suffering to the general public.
They said this hike will raise the cost of transportation and agriculture, and may also affect the price of electricity at a time when people are already reeling from the recent surges in the prices of daily commodities.

According to the press release issued by the Ministry of Power, Energy and Mineral Resources Wednesday night, BPC has been incurring a loss of Tk20 crore per day as it is selling diesel at Tk13.01 per litre and furnace oil at Tk6.21 per litre lower than their imported prices.

In October this year, the BPC lost over Tk726 crore as it supplied different petroleum products at the previous prices, according to media reports.

In response to the price hike, Bangladesh Truck-Covered Van, Tank Lorry, Prime Mover Owners and Workers’ Coordination Council in a press release also observed that the government’s latest move alongside the hikes on toll for several bridges will only add to the misery of the transport sector already ravaged by the Covid-19 pandemic.
Rajshahi and Chittagong are two of the districts where local units of owners and workers have already announced to stop operating the long-haul and local transports – both public and cargo – from Friday.