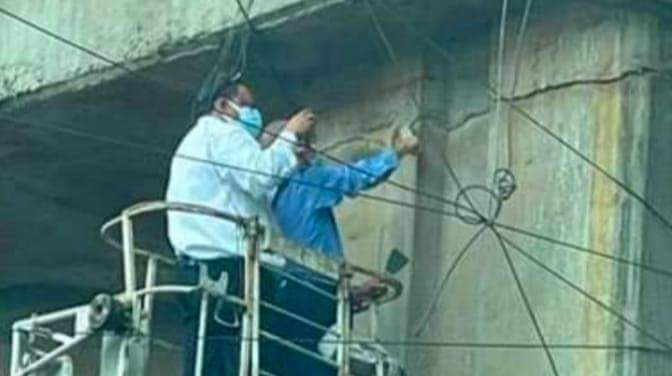 The Chattogram City Corporation has said it found no cracks in the pillar of Chattogram’s MA Mannan Flyover and forwarded its recommendations to ensure its structural integrity.
A two-member investigation panel submitted a report on Thursday night, saying there was “no reason to fret” over the matter.

A member of the committee, Muhammad Abdur Rahman Bhuiyan, who is the lecturer of the Department of Civil Engineering of CUET, said, “We submitted a report and forwarded three recommendations.”

“We’ve identified a construction joint there. The ramp was built for light vehicles. We’ve made recommendations to ensure that, so that heavy vehicles do not get on it.”

The committee also pushed for increased supervision on keeping the ramp operational for a long period of time.

“There is a range of modern technologies to do that now. We’ve asked authorities to monitor it properly,” said Dr Bhuiyan, also a director of the Institute of Earthquake Research.
The CCC’s chief engineer Rafiqul Islam Manik on Friday said, “According to the report, there are no cracks or structural flaws in the pillar. We’ve asked MAX Group to seal the gap with high strength thin concrete and carry out the repairs fast.”

“They’ve already placed three height barriers at the entrance of the ramp and the spot where it connects to the flyover to bar heavy vehicles from getting on it.

“The ramp will be opened to the public once the repairs are done. The probe committee has asked us to sometimes observe the important sections of the flyover.”

On Oct 25, Chattogram police closed a section of the flyover to traffic after news of a crack appearing in the ramp’s pillar spread.

The flyover was constructed by Chattogram Development Authority and the CCC has looked after it since it was handed over to them in 2019.
After inspecting the site the following day, City Mayor Rezaul Karim Chowdhury and Rafiqul voiced concern over a possible flaw in the design of the ramp.

That morning, CDA engineer Mahfuzur Rahman, director of the flyover project, commented that the movement of heavier vehicles could have caused the crack. However, later in the day, he claimed there were no cracks at all.

Experts from Design Planning and Management Consultation Limited and MAX Group inspected the ramp the following day and also concluded that the pillar had no cracks, declaring the apparent crevice to be a construction joint.

However, CDA and CCC blamed each other for the absence of a height barrier on the ramp.

Stretching from the city’s Chandgaon area to the Bahaddarhat intersection, the 1.33 km flyover opened in October 2013 after being constructed with a budget of Tk 1.06 billion.

A ramp leading to Kalurghat was later added in 2017. The Chattogram Development Authority took steps to link a 326m long and 6.7m wide ramp with the flyover in December 2016, as demanded by the locals.