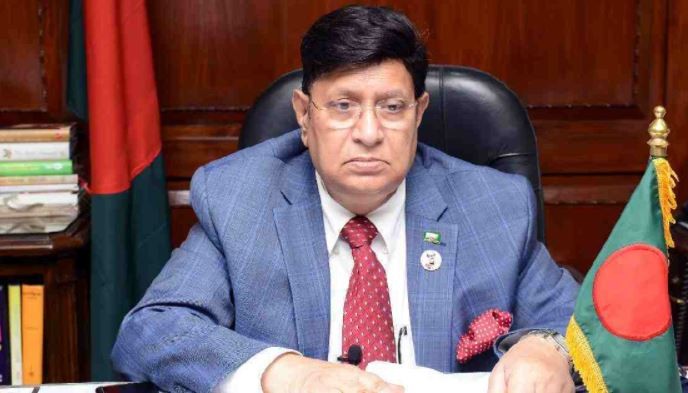 “We have got a lot of good assurance from the private sector and the governments. We are hopeful,” Dr Momen told reporters at a virtual briefing joining from London.

The COP26 summit, hosted in Glasgow, has brought parties together to accelerate action towards the goals of the Paris Agreement and the UN Framework Convention on Climate Change.
The foreign minister said Bangladesh needs to work a lot, especially in preparing good proposals, which he sees as a challenge but achievable.

“We have a long way to go. We have a challenge but we can manage to get plenty of funds,” he said, adding that there is a willingness to provide funds.

Prime Minister Sheikh Hasina has been identified as one of the five influential dealmakers at COP26 being held at Glasgow, according to a BBC report that described Hasina as the “voice of the vulnerable”.

The four other influential dealmakers who will have a major influence on the summit’s success or failure are China’s climate negotiator Xie Zhenhua, Saudi Arabia’s Ayman Shasly, UK Minister Alok Sharma, Spain’s Minister for ecological transition Teresa Ribera, and Bangladesh’s Prime Minister Sheikh Hasina.
The Prime Minister spoke on behalf of the Climate Vulnerable Forum, a grouping of 48 of the countries most threatened by climate change.

The prime minister told the COP26 that Bangladesh cancelled 10 coal-based power plants involving $12 billion of foreign investment, just to supplement its efforts against the adverse impacts of climate change.

“Bangladesh has taken a leadership role and the prime minister has made a very decisive action (cancelling coal power plants). We showed the rest of the world,” Dr Momen said, adding that their collective aim is to save the planet.
Responding to a question on fugitive convicts, the foreign minister said he raised it and it will further be discussed in detail in the home minister-level meeting.

“We want good governance. We want the rule of law. You (UK) should be supportive of us,” he conveyed to the British side.

Responding to a question on those who are spreading disinformation, Dr Momen said some people do not want to see the development of Bangladesh. “Hopefully, they will understand their mistakes. False propaganda never sustains.”

The foreign minister said they are working hard under the leadership of Prime Minister Sheikh Hasina and a dramatic change is coming in Bangladesh.

Prime Minister Sheikh Hasina addressed the key segment of the COP26 on November 1. She also attended a joint meeting of the CVF and Commonwealth as the chief guest.
At COP26, the prime minister made a four-point call. First, she said, the major emitters must submit ambitious NDCs, and implement them.

Second, Sheikh Hasina said, developed countries should fulfill their commitments of providing $100 billion annually with a 50:50 balance between adaptation and mitigation.

Third, she said, the developed countries should disseminate clean and green technology at affordable costs to the most vulnerable countries. The development needs of the CVF countries also need to be considered.

Fourth, the prime minister said, the issue of loss and damage must be addressed, including global sharing of responsibility for climate migrants displaced by sea-level rise, salinity increase, river erosion, floods, and draughts.

She is now in London and will visit Paris, France.